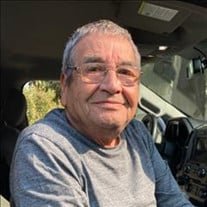 Alfredo Corpus Sr. Was a beloved son, brother, husband, father, grandfather and great grandfather. Alfredo was born on January 8th, 1944, in Eagle Pass, Texas. Starting at a young age, Alfredo's family made their way from Texas to throughout California and eventually ending up in the central valley. Here in the central valley is where he started his love for agriculture. He became a field worker then eventually made his way up to a labor contractor. Alfredo enjoyed seeing the outcome of his hard work through the harvest. He was always sharing his knowledge of agriculture to anyone needed his assistance, even sometimes when others didn't know they needed it. Alfredo's hobbies included fishing, camping but most of all visiting different casinos. Alfredo always said after he retired from agriculture that his next career would be a professional gambler. So, he tried to become just that as much as he was able to. He will be deeply missed by everyone he touched in his life time. He is survived by his loving wife for over 55 years, Sarah Corpus; five children; Melinda, Patsy, Sherry, Alfredo Jr., and Tony; Fourteen grandchildren and eighteen great grandchildren. A Rosary will be held at 6:00 PM Monday, April 12th, 2021 at Salser & Dillard Creighton Chapel, 1588 Lincoln Street, Kingsburg. A Memorial Mass services will be held at 10:00 AM Tuesday, April 13th, 2021 at St. Anthony's of Padua, 5770 North Maroa Avenue, Fresno, immediately followed by inurnment at St. Peter's Catholic Cemetery, 264 N. Blythe Avenue, Fresno. Services have been entrusted to Salser & Dillard Creighton Chapel. Memorial Tributes and condolences may be offered by logging onto www.salseranddillard.com.

The family of Alfredo Corpus, Sr. created this Life Tributes page to make it easy to share your memories.

Send flowers to the Corpus family.