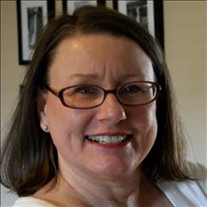 Alice J. Fukagawa 65, of Kingsburg passed away from this life on the morning of Tuesday September 10, 2019 at home with her loving husband Steve at her side. Born Alice Virginia Jenkins to Roland and Louverne "Polly" Jenkins on April 1, 1954 in Milton, Florida, the youngest of two daughters and sister to Renee. She became known as "Ginnie" to her family and friends. The Jenkins Family moved to California in 1960, living for one year in Madera before settling in Kingsburg. She went through Kingsburg Elementary, Jr. High and High Schools graduating in 1972. The first official job she had was at Alys's Gift Shop, where the current Kingsburg City Hall is located, and there she developed a love of all things Steinbach. Ginnie collected both Christmas ornaments and nutcrackers, and finally had to slow the rate of collection when she ran out of room on the shelves where they sit on display. In 1975 while at a going away party, Ginnie met a man named Steve Fukagawa. They began dating and quickly became inseparable. Steve proposed on April 23, 1977 and they were wed in Kingsburg on November 19, 1977. They decided to live in Kingsburg and purchased their first home together on Mariposa Street. Happily married they welcomed their first daughter Susanne, and a second daughter Ashlyn, a few years later. Ginnie returned to school shortly after Ashlyn was born and graduated with an Associate's of Science Degree for Dental Assisting from Reedley College. However, she never worked as a Dental Assistant and instead went to work in the Fall of 1986 at Kingsburg High School as the Library Aide, later becoming a Library Media Tech. She loved working at KHS and after her twenty-eighth year she retired in September 2014. If Steve was the first great love of her life, and her children (and eventually grandchildren) the second, the third was most definitely a tie between KHS Sports and photography. She began to take pictures of students as they played their sports, trying to get at least one pic of every player. The family traveled to home games, away games, and tournaments that were hours away from Kingsburg, all so she could support the students and take pictures for them and their family members. However, it wasn't only for other people's children, Ginnie never missed a basketball game, volleyball match, swim/dive meet, or cheer event for Susanne and Ashlyn either. In 2008 Ginnie welcomed her first grandchild and became Gigi. Being Gigi was quite possibly her favorite role and title. Thus, starting a new generation of activity and sports photography. She rarely missed a game or event and would reschedule appointments or outings to attend recitals, games, swim meets, and the ever-popular preschool graduation. The greatest gifts Ginnie shared with those who knew and loved her were presence and time. She was a loyal friend, devoted wife, mother and Gigi, a listening ear, and a sounding board. Advice was given with both honesty and love. You cannot do those things well without being giving of both your presence and time. Ginnie was preceded in death by her parents Roland and Louverne Jenkins. Ginnie is survived by her husband of nearly 42 years Steve, her daughter Susanne Eidal and husband Bryan and their children Grace, Nathan, and Tess, her daughter Ashlyn Swan and husband Daniel and daughter Taylor, her sister Renee Wilson, many cousins, nieces, and nephews. A memorial service will be held Friday September 20, 2019 at 10am at the Evangelical Covenant Church Kingsburg. Tributes and condolences may be offered by logging onto www.salseranddillard.com.

Alice J. Fukagawa 65, of Kingsburg passed away from this life on the morning of Tuesday September 10, 2019 at home with her loving husband Steve at her side. Born Alice Virginia Jenkins to Roland and Louverne "Polly" Jenkins on April 1, 1954... View Obituary & Service Information

The family of Alice Jenkins Fukagawa created this Life Tributes page to make it easy to share your memories.

Alice J. Fukagawa 65, of Kingsburg passed away from this life...

Send flowers to the Fukagawa family.