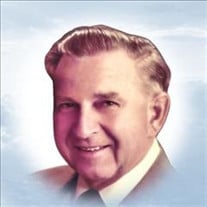 OBITUARY OF ARLAN JOHN HAROLDSEN June 10, 1927 � February 3, 2022 Arlan John Haroldsen was born June 10, 1927 in Idaho Falls, Idaho to Reuben Haroldsen and Mary Viola Gardner. At 94 years old, Arlan passed away in his home in Kingsburg, California on February 3, 2022, surrounded by family members. He is preceded in death by Eileen, his wife of 75 years, three of their children, Linda Diane Haroldsen (2 weeks old), John Dale Haroldsen (32 years old), and Ronald Roy Haroldsen (65 years old), his parents and all of his six siblings (four brothers and 2 sisters). Arlan married his high school sweetheart, Eileen Hartley, on May 15, 1945 in Nyssa, Oregon. Their first home was a two-bedroom house located one mile from their parents' home. Their first car was a Ford Model A Roadster with a rumble seat in the back. He was employed by his father-in-law in Nyssa, Idaho for about five years farming potatoes. Arlan and Eileen began their family with a little girl, Linda Diane. Their first heart breaking trial was when she passed away two weeks later with complications from pneumonia. One year later in May of 1947, their next child, a healthy baby boy, Ronald Roy, was born. He was the joy of their life for three years and then�TWINS! Jerry Lynn and Larry Dean were born in March of 1950. The family then moved to Boise, Idaho where they remained for 4 years as Arlan worked for the Standard Oil Company. During their time in Boise, believe it or not, their family was increased by TWINS again! John Dale and Julie Kay were born in May of 1954. In the latter end of 1955, Arlan began his long career with the Union Oil Company, but he would have to move his family from Boise, Idaho to Oakland, California where they resided for 4 years. In June of 1960, he was transferred to the Seattle, Washington area where they stayed for almost 5 years. California bound again, Arlan's new assignment was in Bakersfield, California where they resided for 3 years. On June 26, 1967, Arlan's dream of owning his own business came true when he was granted a distributorship from Union Oil. This took them to Kingsburg, California where they lived for 26 years. During their stay in Kingsburg, they also owned a small gas station with a Feed Store along with the Distribution Plant. Eileen worked alongside Arlan at the Plant as the business secretary until they sold the business and retired to a home in Squaw Valley, California. After 23 years, and much contemplation, Arlan and Eileen decided 8 years ago to return to Kingsburg to be closer to family. Arlan served in various capacities in the Church of JESUS CHRIST of Latter-day Saints, including one of his favorite acts of service for many years in the Fresno California Temple where he served from the day the Temple doors opened until his wife's health declined and she needed his care. He was also very active in the communities wherever they lived. His many years of involvement in the Boy Scouts of America was another highlight of his life. He loved the outdoors and in his younger years enjoyed going fishing. "Grandpa Haroldsen" was known for his homemade ice cream, enchiladas, and barbeque chicken. He definitely had a green thumb when it came to growing a beautiful garden, and would always have tons of tomatoes to give away. He loved woodworking as he made wooden animals that lined his backyard fence. His infamous bird houses and child-size tables and benches are found in many yards and homes, not only in his neighborhood, but in the neighborhoods of some of his grandchildren. At Christmas family gatherings Arlan would often bring out his trumpet and play Christmas Carols. One of the fondest memories the grandkids have is the annual Easter Scavenger Hunt. His witty clues stumped everyone, adults and teenagers alike. Arlan leaves a legacy of 6 children, 14 grandchildren, 54 great-grandchildren, and 2 great-great-grandchildren, with another one expected to arrive in June. Viewing will be held 2:00 PM - 6:00 PM Thursday, February 10th, 2022 at Salser & Dillard Creighton Chapel, 1588 Lincoln Street, Kingsburg. Graveside services will be held 9:00 AM Friday, February 11th, 2022 at the Kingsburg Cemetery, 12782 E. Clarkson Avenue, Kingsburg. Services have been entrusted to Salser & Dillard Creighton Chapel. Memorial Tributes and condolences may be offered by logging onto www.salseranddillard.com.

The family of Arlan J. Haroldsen created this Life Tributes page to make it easy to share your memories.

Send flowers to the Haroldsen family.