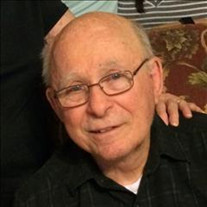 Arthur Standard Obituary Arthur Standard was born in Monrovia, CA on February 13, 1931 to Eldon & Francys Standard. He passed away peacefully in his home at the age of 89 in Kingsburg, CA on March 12, 2020. Arthur was a graduate of Glendale High School in Glendale, AZ and The University of Arizona in Tucson, AZ where he received his Teachers Credential. Arthur married his High School sweetheart Dolores Roberson on June 8, 1952. They enjoyed their family & journey through life together for almost 68 years. Arthur proudly served his Country during the Korean War in the United States Air force as an Electrical Technician. He was a Math Teacher in San Jose, CA for 27 years. He owned a newspaper dealership with The San Jose Mercury for 18 years. In addition to these, he also owned and operated a Print Shop in Santa Clara. Upon retirement in 1989 Arthur & Dolores moved to Sandy, OR to be close to family where they lived for 28 years. In 2017 they moved to Kingsburg, CA. Arthur enjoyed fishing, camping, working with computers and spending time with his family. In retirement he enjoyed having cows, horses, raising Donaldson Trout in his fishpond, playing racquetball and going out for lunch with the "Lunch Bunch." Arthur was proceeded in death by his parents and his son Douglas. He is survived by his wife Dolores. His sister Donna & George Snow. 2 daughters: Marcella & Fred Tau and Marisa Standard. 6 grandchildren and 8 great grandchildren, as well as many loving friends. Memorial Services will be held in the Sandy Church of the Nazarene on Friday, March 20th. Interment will be in The Cliffside Cemetery in Sandy, Oregon. Services have been entrusted to Salser & Dillard Creighton Chapel. Memorial Tributes and condolences may be offered by logging onto www.salseranddillard.com.

Arthur Standard Obituary Arthur Standard was born in Monrovia, CA on February 13, 1931 to Eldon & Francys Standard. He passed away peacefully in his home at the age of 89 in Kingsburg,... View Obituary & Service Information

The family of Arthur O. Standard created this Life Tributes page to make it easy to share your memories.

Arthur Standard was born in Monrovia,...

Send flowers to the Standard family.