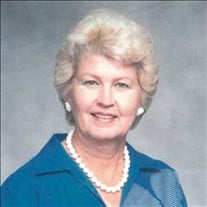 Barbara Louise Engstrom passed away peacefully on June 21, 2021. She leaves behind a legacy of family, teaching, music, and many long-time friendships. Barbara was born on October 28, 1929 in Kingsburg, California to Julian and Beulah Jacobson. She was the youngest of five children. As a child, she loved singing and playing musical instruments (she started on percussion and violin but learned to play many others), sports and her father's horses. Music was especially important to her family. Her father Julian was an accomplished cornetist that would often use a "mute" to soften his sound while playing lullabies for his children at night. Her mother Beulah was equally talented on the piano and would often accompany the kids while they sang hymns in preparation for church on Sunday mornings. Barbara was a lifelong resident of Kingsburg, graduating from Kingsburg High School in 1947. She attended Reedley College immediately thereafter and began teaching public school part-time on an emergency credential. In 1954, she married the love of her life, Wally Engstrom and began devoting more and more of her time to raising her three boys Steve, Dale, and Larry, hosting family and friend gatherings, and singing in the church choir. When her boys were quite young, she would sing to them when putting them to bed each night. At that time, they all slept in the same room and, as each one grew a little older, he would join in the singing. Barbara eventually taught them to sing in three-part harmony and the boys ended up performing at public gatherings and even on the radio. Singing in the car on family trips became a constant source of fun and entertainment. Once all three boys reached school age, she returned to college at Fresno State and finished a degree in Elementary Education. After teaching public school music in nearby Traver for a short time, she landed a first-grade teaching position at Washington School in Kingsburg where she stayed for 17 years. She led an extremely busy life while teaching fulltime, raising her three boys and running the household. In addition, she regularly hosted large (often 30-40 people) family gatherings including Christmas, Thanksgiving, and birthday parties. As a result, she learned to walk extremely fast (her sons remember having to run just to keep pace), drive her car with equal purpose, and seemed perpetually on the go. When Barbara retired in 1986, she and Wally moved to "the country" outside of Kingsburg and transitioned to a life filled with world travel, cruise ships, 5th-wheel trailer group trips, farming raisins, and relaxing with friends and family. Barbara especially relished reading books on the lanai of their time-share condo on Maui with her best friend and sister Lois June. Barbara was an active, life-long member of the Methodist Church (now Kingsburg Community Church), singing in the choir and helping with various church events and activities. She also volunteered her time as a member of a vocal trio that sang regularly for convalescent and nursing homes. In addition, she was a long-time member of the Kingsburg City Band's percussion section. This was especially fun for her since her husband Wally, then later her son Dale, were the conductors of that ensemble. Barbara will be greatly missed. She loved music deeply, had a great "ear" for it and was famous for singing songs at the drop of a hat. Any word uttered in normal conversation might prompt her to sing a song featuring that particular word. In addition to her musical talent, Barbara was known for her kind disposition, generosity, spelling acuity, and an overall positive outlook on life. Barbara was preceded in death by her husband Wally, son Steve, as well as her siblings Russell, Thelma, Florence, and Lois June. She is survived by sons Dale (Lucretia) and Larry (Kris), daughter-in-law Sheryl, 9 grandchildren (Jeff, Jason, Jeremy, Joel, Corey, Katie, Malary, Liza and Jill) and 13 great-grandchildren. Visitation for friends and relatives will take place on Thursday, July 22, 2021 from 3-6pm at the Salser & Dillard Creighton Chapel located at 1588 Lincoln Street in Kingsburg. A graveside service will be held at the Kingsburg Cemetery at 9am on Friday, July 23 followed by a celebration of life at Kingsburg Historical Park (2321 Sierra St) at 10am for both her and her husband Wally (he passed away last August during the coronavirus pandemic). In lieu of flowers, donations may be made to the Kingsburg Community Church or the Kingsburg City Band. Condolences and remembrances may be left at: https://www.creightonchapel.com/obituaries/Barbara-Engstrom

Barbara Louise Engstrom passed away peacefully on June 21, 2021. She leaves behind a legacy of family, teaching, music, and many long-time friendships. Barbara was born on October 28, 1929 in Kingsburg, California to Julian and Beulah Jacobson.... View Obituary & Service Information

The family of Barbara Louise Engstrom created this Life Tributes page to make it easy to share your memories.

Send flowers to the Engstrom family.