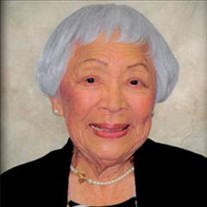 Loving mother and Nana, loyal friend and employee, and ardent golfer, Beatrice Masumi Kashiwagi was born on August 7, 1922 to Shotaro and Shigeko Tamura in Florin (Sacramento County), California. Bea graduated from Elk Grove High School in 1940. In 1943, she left internment camp in Jerome, Arkansas for Ft. Thomas, Kentucky to marry Pfc. William Y. Kashiwagi, to whom she was married until 1973. After the war, they settled in Sacramento where their daughter, Brenda, was born. Bea worked as a senior/clerk typist for the State of California/California Youth Authority. She moved to Los Angeles to be near family in 1974 where she continued to work and retired from the Youth Authority after 37 years of service. In Southern California, she was active in the Nisei Women's Golf Club and became a charter member of the Single Seniors Golf Club traveling throughout the world to golf and sightsee. In 2003, Bea moved to Park Place in Kingsburg, California. She joined the Kings River Golf and Country Club and continued to sew, garden and line dance. She became an avid Fresno Grizzlies and San Francisco Giants fan. She said her final goodbye on October 19, 2019. Bea is predeceased by her father Shotaro and mother Shigeko and brother Bud Tamura. She is survived by her daughter, Brenda Nagata; three grandchildren: Robyn (Rand) Ide, Kristyn (Noah) Jacobson and Blayne (Heidi Kimura) Nagata; her great-grandchildren: Jase & Cole Ide and Zachary & Tyler Kimura-Nagata; as well as her brothers, John and Ed Tamura. Remembrances may be sent to: Hinds Hospice, 2490 W. Shaw Ave.#101, Fresno, CA 93711 or United Japanese Christian Church, 136 N. Villa, Clovis, CA 93612. Tributes and condolences may be offered by logging onto www.salseranddillard.com.

The family of Beatrice Masumi Kashiwagi created this Life Tributes page to make it easy to share your memories.

Loving mother and Nana, loyal friend and employee, and ardent...

Send flowers to the Kashiwagi family.