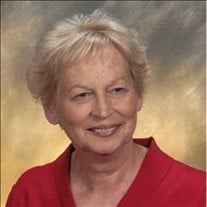 Betty Ruegge Betty Mae Ruegge, 79, passed away December 12, 2021 at Heritage Crossings Hospice, where she had spent her final days peacefully. On January 24, 1942 Betty was born to Frank and Louise Valish. She was born in Columbus, Nebraska. She graduated in 1959 from Schuyler High School in Schuyler, Nebraska, where she participated in Glee club, Pep, Choir among other activities. After a couple years of College and working at Mutual of Omaha Insurance company, she met Herb Ruegge. After a short courtship, they married in December of 1967 on a snowy day in Omaha. They then traveled out west for a job for Herb. Oregon is where their Daughter Jennifer was born. The road then took them to Minnesota where son Matthew was born. After 7 years, they moved back to their roots in Nebraska. Several friends and family around made it a joyous time in their lives, however in 1983, one more move would be made�to California. Betty worked various jobs during her lifetime, but longest was spent at Kingsburg Insurance Agency where she later would retire in 2005. After retirement, she didn't slow down. Betty worked short hours for City Hall and volunteered, as well as took care and spent time with Grandchildren and many, many friends. Her passion was helping at Kingsburg Cancer Volunteers, many Swedish Festivals, and the Watermelon Festival. She enjoyed being an active member of her church, Concordia Lutheran and also the Tuesday Club. Betty could be often seen around town on her morning walks or quick bike rides to the Post Office. She has 5 grandchildren, Justine Woods Ulrich, Kendall Woods, Matthew Ruegge II, Kinsleigh Ruegge, and Skyler Ruegge. Betty loved gardening, a bit of travel, game nights, watching her grandchildren and we mustn't forget about her beloved Nebraska Huskers Football. She is survived by her daughter, Jenny and her husband Luke Woods of Kingsburg. And Matt Ruegge of Kingsburg. Bern, her brother and his wife Pat of Lexington, Ne, Brother in Law Earl also in Ne. and several nieces and nephews throughout Nebraska and Florida. She is preceded in Death by her beloved husband, Herb, her parents, and her sister Gladys Sedlacek. Services will be as follows; Kingsburg Graveside service at 11 am on the 28th of December, followed by a luncheon at Historical Park. Remembrances may be made to Kingsburg Cancer Volunteers. PO BOX 26, Kingsburg, Ca. 93631 Or: Historical Park Society PO BOX 282 Kingsburg, Ca. 93631

Betty Ruegge Betty Mae Ruegge, 79, passed away December 12, 2021 at Heritage Crossings Hospice, where she had spent her final days peacefully. On January 24, 1942 Betty was born to Frank and Louise Valish. She was born in Columbus, Nebraska.... View Obituary & Service Information

The family of Betty Mae Ruegge created this Life Tributes page to make it easy to share your memories.

Send flowers to the Ruegge family.