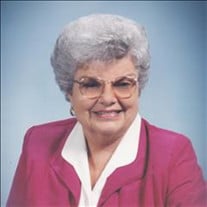 Beverly Jane "Bubs" Olson, 91, passed away peacefully and surrounded by family on Tuesday, November 2, 2021 at her home in Kingsburg. She leaves behind daughter Judy Parlier and husband Greg of Madison, AL; son Gary Olson and wife Julie of Kingsburg; son Brad Olson and wife Elaine of Kingsburg; grandchildren Jamie and husband Bryan, Tim, Jeff and wife Melissa, Tracy, Kristi, Andy and wife Kim, Danny and wife Rebecca, Bobby and wife Carlee; great grandsons Collin and Caleb; and many friends. She is preceded in death by her husband Darrel, grandson Steven Parlier, parents Thor and Alma Johnson, and sister Marge Paulsen. Bubs was born in Selma and raised on the family farm in Kingsburg. She graduated from Kingsburg High School in 1948 and Reedley College in 1950. Bubs and Darrel met through a mutual friend at the end of her freshman year and Darrel's sophomore year. Their first date was at a Kingsburg High softball game. They dated for two years in high school, then started back up again in 1950 � after that, it was "together forever." After Darrel was drafted into the Army in early 1951, he and Bubs were married on July 14, 1951. After a 3-day honeymoon, he was assigned to San Pedro, California before being deployed to Panama. Bubs joined him there two months later and stayed for four months until Darrel was deployed again to Greenland and Labrador. During that time, Bubs came home to Kingsburg. In fall of 1952, she gave birth to their daughter, Judy. Darrel was discharged early the next year and returned home to Kingsburg. They went on to have two more children, Gary and Brad, and raised their family in their home on the family ranch � the same house she passed away in 68 years later. Upon Darrel's retirement, they enjoyed traveling with family and friends. They took their RV to MLB spring training in Arizona for 15 years with their trailer club, as well as countless trips to Yosemite, Pismo Beach, and their cabin at Shaver Lake. They visited all but two locations where Judy and Greg were assigned during Greg's years in the Army. Bubs loved baking, baseball, participating in church activities, befriending all the stray cats on the ranch, and watching her grandkids in their sporting and music endeavors. Her great grandsons were such a source of joy for her in her last years. Her faith was her foundation in life. Everyone who knew her could see the love of Christ working through her. Along with being a devoted wife, mother, and grandmother, she was a devoted servant of God who went out of her way to make sure everyone around her knew they were loved. The family would like to thank all of the caregivers who cared so lovingly for Bubs over the last several years: Lisa, Kalynn, Sharon, Tracy, Jasmine, Katie, Megan, Olivia, Sasha, Rosie, Trish, Estelle, Teresa, Melissa, Kathy, Debbie, Renee, Ana, and Alexis; Dr. Bruce Trevino; and everyone at Optimal-Bristol Hospice. A viewing is scheduled for Monday, November 15 from 4-6pm at Salser & Dillard Funeral Chapel. A graveside service will be held on Tuesday, November 16 at 11am at Kingsburg District Cemetery. A luncheon will follow at Kingsburg Community Church (1532 Ellis Street). If it is raining at the time of service, it will moved to the Community Church sanctuary. Memorials may be given to Kingsburg Community Church. Services have been entrusted to Salser & Dillard Creighton Chapel. Memorial Tributes and condolences may be offered by logging onto www.salseranddillard.com.

Beverly Jane "Bubs" Olson, 91, passed away peacefully and surrounded by family on Tuesday, November 2, 2021 at her home in Kingsburg. She leaves behind daughter Judy Parlier and husband Greg of Madison, AL; son Gary Olson and wife Julie of... View Obituary & Service Information

The family of Beverly Jane Olson created this Life Tributes page to make it easy to share your memories.

Send flowers to the Olson family.