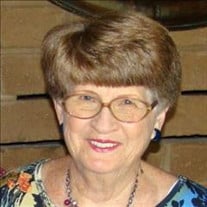 After a brief illness, Bonnie Marie Lindgren peacefully returned home to the Lord on Wednesday, September 4, 2019. She was born on November 22, 1935 in Lindsay, CA to parents Robert and Viola Raley. After graduating as a Cardinal from Lindsay High School, she moved to Pasadena where she attended Pasadena College. In 1955, she returned to the Central Valley and settled in Fresno. She worked in the accounting department for McMahan's Furniture. It was during this time that she became acquainted with her next-door neighbor, Doug Lindgren. Their friendship quickly grew and they became destined to spend the rest of their lives together. On July 5, 1958, they were married in the Nazarene Church in Fresno. After a honeymoon in Carmel, they settled in Kingsburg where they would happily spend the next 61 years together. During this time, they welcomed their daughter, Lori, and sons Larry and Kent into the world. In addition to being a dedicated wife, mother, and grandmother, Bonnie was the bookkeeper for Loretto Vineyards, which was the family farming operation. She continued in this role until her retirement in 2000. Bonnie was actively involved in the Clay School Parents Teachers Club, the Tuesday Club, and California Women for Agriculture. She was the former Treasurer at Colony Covenant Church and frequently attended Grace Church of The Valley with her grandsons. During her spare time, Bonnie enjoyed reading, word puzzles, and spending time with friends. Her main source of enjoyment, however, was her family and, more specifically, her grandchildren. She spent as much time as possible with them and was in constant attendance at their academic, sporting, musical, and social events. She took extra pleasure in supporting a multitude of Kingsburg Youth sports teams, Clay School sports teams, and Kingsburg High sports teams. Her consistent, energetic presence and smiling face at these events led her to be known by others simply as Nana, which was her favorite nickname. The family takes solace in knowing that she is now watching from above with her Lord while also enjoying the best seat in the house. Bonnie leaves behind Doug Lindgren, her loving husband of 61 years; daughter Lori Williams and son-in-law Paul Williams, both of Fresno; son Kent Lindgren and daughter-in-law Tatyana Lindgren, both of Kingsburg; grandchildren Jacob Williams of New York, Alison Williams of Fresno, and Jonathan and Nicholas Lindgren, both of Kingsburg; sister Vonnie Collier of Porterville; and brother Robert Raley of Florida. Services will be held on Monday, September 16, 2019 at 10:00 am at Salser & Dillard Creighton Chapel in Kingsburg. Interment will follow at the Kingsburg Cemetery. Condolences may be offered by logging onto www.salseranddillard.com.

After a brief illness, Bonnie Marie Lindgren peacefully returned home to the Lord on Wednesday, September 4, 2019. She was born on November 22, 1935 in Lindsay, CA to parents Robert and Viola Raley. After graduating as a Cardinal from Lindsay... View Obituary & Service Information

The family of Bonnie Marie Lindgren created this Life Tributes page to make it easy to share your memories.

Send flowers to the Lindgren family.