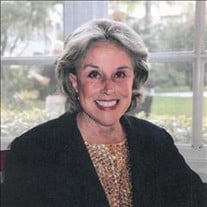 Bonnie Jeanne Nelson, daughter of Lillian and Ted Beeman, went to be with the Lord on March 4th, 2022. She was 95. She was born on August 7, 1926 in Haddam, Kansas. Her father was called out to Kingsburg, California for his telegraphy skills to work at Southern Pacific Railroad soon after the War started. Ted and his family settled in Kingsburg where Bonnie and her brother Dean attended high school. When Willis (Bill) Nelson (son of Lilly and Clarence Nelson of Kingsburg) returned from the War after serving as a navigator in the Air Force, Bonnie fell in love. They married in Kingsburg in June of 1948 after graduating from Fresno State. They moved to San Francisco where Bill attended dental school. They had 3 children, Steve, Sue and Tom. They moved to Menlo Park and then Atherton where they lived for over 50 years. Bonnie was predeceased by the love of her life, Bill, and by her brother, Dean Beeman also of Kingsburg. She is survived by her three children and their spouses -- Steve (Missy), Sue (Jon), and Tom (Sumi). She is also survived by her 11 grandchildren and 17 great-grandchildren. They were long-time members of Menlo Park Presbyterian Church. They built a second home in Carmel and spent much time there in their later years, but mostly Bonnie's love was for her husband, children and grandchildren. She was devoted to them and always found a reason to be with them, either by visiting them or having them visit her. She will be missed, but she is now home with her Savior, the Lord Jesus Christ, enjoying the riches of His grace, where she longed to be. "I have no greater joy than this, to hear of my children walking in the truth." 3 John 1:4 Graveside services will be held at 11:00 AM Monday, March 21st, 2022 at Kingsburg Cemetery, 12782 E. Clarkson Avenue, Kingsburg. Services have been entrusted to Salser & Dillard Creighton Chapel. Memorial Tributes and condolences may be offered by logging onto www.salseranddillard.com.

Bonnie Jeanne Nelson, daughter of Lillian and Ted Beeman, went to be with the Lord on March 4th, 2022. She was 95. She was born on August 7, 1926 in Haddam, Kansas. Her father was called out to Kingsburg, California for his telegraphy skills... View Obituary & Service Information

The family of Bonnie Jeanne Nelson created this Life Tributes page to make it easy to share your memories.

Send flowers to the Nelson family.