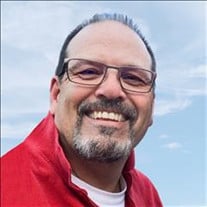 Brien Richard Carlson was a devoted husband, father, son, papa, uncle and friend. It is with a heavy heart and great sadness that the family announces that Brien went to his heavenly home to be with the Lord on February 19, 2022 at the age of 60. Brien was born in Selma, California on September 25, 1961. He was a happy surprise to parents Leonard and Evelyn and joined older siblings Galen and Marlene. Brien had many happy memories spending time with his siblings and helping his dad on the family ranch. His love for the outdoors started at a young age, where he enjoyed fishing, hunting and participating in the World of Outlaws sprint car racing team. Brien's career with PG&E spanned 38 years, where he worked in Energy Conservation, Pump Testing, Account Services, and later in New Business where he became an Industrial Power Engineer and Manager for various projects and territories. During the early years of his career, he juggled taking care of his young family which included the birth of his two sons Christopher in 1985 and Jacob in 1988, working during the day and attending online night courses from the University of San Francisco where he received his Bachelor's degree. While working at PG&E he interacted with many colleagues that later became lifelong friends. In 1998, he married the love of his life Robin Takeno. They enjoyed trips to Pismo where they would stay in their RV, walk on the beach and eat fresh seafood. Brien and Robin regularly attended church as his faith in the Lord was an essential part of his life. Brien enjoyed trying new food and cooking for friends. When he wasn't cooking for Robin, he would barbeque and cater parties for friends and family. His cherished hobbies and activities included martial arts, riding his motorcycle, hunting, fishing, building his Jeep and spending time with his family � especially his grandchildren who called him "papa". Brien was preceded in death by his mother, Evelyn Carlson. He is survived by his loving wife, Robin Carlson; children, Christopher and Jacob and their spouses; six grandchildren, Johnie, Jessie, Jaxon, Ellyssa, Bryanna and Nicholas; father, Leonard Carlson; brother, Galen; and sister, Marlene Loyd; as well as numerous nieces and nephews. Brien's friendship, faith in God and love for his family will remain in our hearts forever. Anyone fortunate enough to have known Brien would describe him as considerate, generous and a friend to everyone. His caring nature extended to everyone around him, as he was always willing to lend a helping hand to anyone in need. The Carlson family would like to sincerely thank family and friends for their many thoughts and prayers. Due to the COVID-19 pandemic the burial service will be private. A celebration of life ceremony will be held at a later date. The family has requested those attending to please wear a facemask. In lieu of flowers, the family has requested that donations be made to Bethany Church Fresno, 9161 N. Maple Ave., Fresno, California 93720 or to the charity of your choice. Services have been entrusted to Salser & Dillard Creighton Chapel. Memorial Tributes and condolences may be offered by logging onto www.salseranddillard.com.

Brien Richard Carlson was a devoted husband, father, son, papa, uncle and friend. It is with a heavy heart and great sadness that the family announces that Brien went to his heavenly home to be with the Lord on February 19, 2022 at the age... View Obituary & Service Information

The family of Brien Richard Carlson created this Life Tributes page to make it easy to share your memories.

Send flowers to the Carlson family.