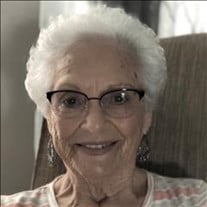 Carolyn Anne Young Kimbley July 15, 1934 - February 28, 2021 Carolyn Anne Young was born on July 15, 1934 to Annie Lee and Kenneth George Young in Vernon, Texas. She was the second of six children. She lived in Vernon until the family moved to Buttonwillow, California in 1943. A short time later they moved to Dinuba where they would remain for several years. Two short years after moving to California, her father passed away on December 24, 1945 at the age of 32 - leaving her mother to raise six children. Times were very hard after her father's death, but the family endured and became very close, leaning on each other for love and support. Carolyn attended Dinuba schools and in 1952 graduated from Dinuba High School. When she was sixteen, she met Wilfred (Freddie) Kimbley on a blind date that was arranged by her cousin Glenda. It was love at first sight for Freddie, who always told everyone, "She was the most beautiful girl I'd ever seen!" It took Carolyn a little longer to warm up to Freddie, but he was smitten and determined to get her to fall in love with him. His efforts paid off and they married on July 18, 1952. On May 20, 1953 they welcomed their first of four children. They eventually moved their young family to Kingsburg where they made their forever earthly home. For the most part, Carolyn was primarily a stay-at-home mom working summers at the Del Monte Cannery. After her children were older and in school, she started working full-time as the school librarian at Kings River Elementary School where she worked for 10 years. In early 1987 when she was just 52, she suffered a major heart attack and was forced to retire. She endured many physical illnesses over the years, but never lost hope or faith. On March 2, 2014 her life was changed forever when she lost her husband of 62 years, her beloved Freddie. Due to health issues, she moved to the home of her daughter Susan and her husband Emmitt, where she peacefully took her last breath surrounded by her loving children and grandchildren on Sunday, February 28, 2021. She is preceded in death by her loving parents, Kenneth and Annie, her husband Freddie, her brother Al Young and his wife Lucille, her sister Nelda Thiessen, and her brother-in-law John Petree. She is survived by her children Gaylyn Philips and husband Bert, Davy Kimbley and wife Laura, Kenneth Kimbley, Susan Watkins and husband Emmitt; her 11 grandchildren Shawn and wife Cindy, Mandi and husband Christopher, Misty and fiance Javier, Davy Jr. and wife Teresa, Corey, Leslie, T.J., Cassie, Brittany and husband Scott, Vinnie and wife Liz, and Eric and wife Jodi; 15 great-grandchildren and 3 great-great-grandchildren. In lieu of flowers, remembrances may be made to Nancy Hinds Hospice, 2490 W. Shaw Ave., Ste 101, Fresno, CA 93711. Visitation will be held from 4:00 PM - 8:00 PM Wednesday, March 3rd, 2021 at Salser & Dillard Creighton Chapel, 1588 Lincoln Street, Kingsburg. A Service Of Remembrance will be held at 10:00 AM Thursday, March 4th, 2021 at Salser & Dillard Creighton Chapel, 1588 Lincoln Street, Kingsburg. Services have been entrusted to Salser & Dillard Creighton Chapel. Memorial Tributes and condolences may be offered by logging onto www.salseranddillard.com.

The family of Carolyn Anne Kimbley created this Life Tributes page to make it easy to share your memories.

Send flowers to the Kimbley family.