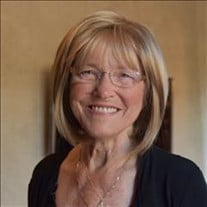 Patricia Colleen Jackson, 80, of Kingsburg CA, passed away on January 24, 2022 after a long battle against multiple illnesses. Colleen was born in Kingsburg on November 1, 1941 to Horace and Vena Carter, where she lived her entire life. She was a farm girl from the beginning - driving tractor and farming on her parents' ranch from the age of 13 and was so happy to marry the farmer of her dreams. Colleen met George Jackson in January 1959. They were married November 27th the same year. In August 1960, their first son Michael George was born. Colleen loved being a mom and everything about being a farmer's wife and spending time on their ranch. In September 1964 they welcomed Brent David to their family. In June 1966 their family was completed with their daughter, Susan Colleen. During their life together, George and Colleen raised turkeys, grew cotton, row crops, stone fruit, and Apple Pears. Early on in their marriage, they both dreamed of owning and running a cattle ranch - a dream that came true in 1975. They enjoyed spending time at the ranch in Cambria whenever they could; hosting bible study groups, friends, and family. Colleen loved to feed and serve people. Her grandkids and great-grandkids remember waking early to help Grandma make enough cinnamon rolls to feed their ever-growing family for every holiday or round-up. She was often found behind the scenes preparing Wednesday night suppers for church, setting out breakfast before the men gathered for Bible study at their house, or hosting tea parties for her friends and granddaughters. Her greatest joy was in serving the Lord and spending time with her family - siblings, cousins, children, grandchildren, great-grandchildren, nieces and nephews. She was an avid sports fan and attended as many of her grandkids' games as she could, always excited to get her hot dog with extra mustard and cheer on her grandkids no matter what sport was on that day. She and George went everywhere together and made many friends along the way as they traveled and supported ministries around the world. Notably important to her was The GCV Master's Seminary. One of the passages she loved to encourage others with was 1 Thessalonians 5:16-18, "Rejoice always, pray without ceasing, give thanks in all circumstances; for this is the will of God in Christ Jesus for you." Colleen was preceded in death by her parents Horace & Vena Carter, sister-in-law Pat Jackson and brother-in-law Jonathan Peterson. She is survived by her husband George, son Mike and wife Lori, son Brent and wife Marlene, and daughter Susan and husband John Diepersloot. Her twelve grandchildren and their spouses: Ryan & Amy, Matt & Tawny, Janelle & Brody, Greg & Audry, Jillian, Brittany & Cody, Jake & Kathryn, Heidi, Kyle & Annie, Zack & Saskia, Caleb & Jenna, and Kristina & Grant. Her 34 great-grandchildren: Madison, Owen, Carter, Amos, Ainsley, Brylie, Jace, Stetson, Wyatt, Bailey, Gunner, Lane, Davis, Brooklyn, Ayla, Goldie, Scout, Adley, Jax, Gerrit, Lottie, Clayton, Arrow, Kambell, Tatum, Adelaide, Arabella, Everleigh, Judah, Oaklee, Ireland, Mabel, and two more arriving in 2022. She is also survived by sister Shirleen Jones, sister-in-law Alma and husband Paul, brother-in-law Don and wife Jo, and brother-in-law David and wife Gail, all of Kingsburg. Viewing will take place on Monday January 31st from 2:00-6:00 pm at Salser & Dillard Creighton Chapel. Services will take place on Tuesday February 1st: Graveside at 9:00 am at the Kingsburg Cemetery followed by a Memorial Service at Grace Church of the Valley at 10:30 am with a lunch reception to follow. Remembrances can be made to: Grace Church of the Valley TMS Scholarship Fund 1101 Marion St, Kingsburg, CA 93631 or Immanuel High School Scholarship Fund In Honor of Colleen Jackson 1128 S Reed, Reedley, CA 93654 Services have been entrusted to Salser & Dillard Creighton Chapel. Memorial Tributes and condolences may be offered by logging onto www.salseranddillard.com.

Patricia Colleen Jackson, 80, of Kingsburg CA, passed away on January 24, 2022 after a long battle against multiple illnesses. Colleen was born in Kingsburg on November 1, 1941 to Horace and Vena Carter, where she lived her entire life. She... View Obituary & Service Information

The family of Patricia Colleen Jackson created this Life Tributes page to make it easy to share your memories.

Patricia Colleen Jackson, 80, of Kingsburg CA, passed away on...

Send flowers to the Jackson family.