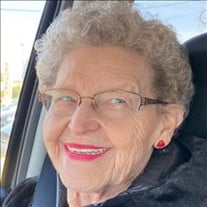 Darlene Mae (Olson) Morris June 21, 1938 � February 19, 2022 It is with deep sadness but also ultimate joy that she is now pain free, that we, the family of Darlene announce her passing on Saturday, February 19, 2022 at 9:10 am. She was a resident of Fresno at the Horizon Health Center. She suffered from Alzheimer's the last few years of her life. Darlene was a devoted Mother, Sister, Aunt, Friend and confidant to many. She was born in Dinuba, California on June 21, 1938 at the family farm to her parents Forrest and Catherine Olson of Kingsburg. Darlene was the oldest of three children and has many fond memories of spending a lifetime of weekends, holidays and birthdays with her extended family. Seems there was never a reason NOT to get together. This sense of family was engrained in all of the families and has been passed down to every generation hereafter. Family is and always will be the most important � EVEN when they get on your nerves. It was during all these family times that Darlene learned cooking, cleaning, helping one another and traveling. Darlene went to Kingsburg High School and graduated in the Class of XXXX. She formed many friendships there, ones that have lasted an entire lifetime. She learned early on that friendship and loyalty are great assets to have. After high school, Darlene attended Reedley Jr. College and received an Associate's Degree in Dental Assisting. After obtaining her degree, she started working for Dr. Charles (Charlie) Nalchajian and Dr. Sam. She loved dental assisting and passed out a few times from all the blood. But fate would have other plans for her. During that time she met and married Wyatt Lee "Dutch" Morris. Together they would move to Oakdale, CA where Darlene worked at Modesto Jr. College and helped Dutch run his construction company. Soon after they were married, they had a daughter Debra. In 1974 Dutch was diagnosed with cancer, and passed in December of 1975. Darlene and Debra moved back to Kingsburg with Forrest and Catherine until she found a home in Fresno and began a life there. Darlene's brother Duane lived at the end of her block and her sister Patty lived a few miles away � always surrounded by family, she began a new career. She started working for the Fresno County Sherriff's Department and had a long career of 31 years. Again, by retaining her friendliness, loyalty and genuine sense of friendship she had many lifelong friends. The most prevalent was Jessie Ciancetti, who took Darlene and Debbie under her wing and brought them into her very large and loving Hispanic family. To this day, the two families remain as one with Debbie having Jessie and Don as God Parents and the love of Auntie Helen, Auntie Carmen and their extended families as well. Darlene became very active in Eastern Star and Daughters of the Nile while Debbie enjoyed a lifelong association with Rainbow Girls, Fresno-Clovis #1. Together Darlene, Debbie and their Rainbow families, mostly the Barbara Blackwood family, would travel up and down the State of California for the next 20 years. Collecting along the way more lifelong friendships. Upon retirement Darlene enjoyed gardening, her service organizations and spending time with family & friends. Before her parents passed Darlene had the ultimate honor of reuniting with her Son, Darren Magill of Fresno and his family. It filled her heart to spend time with them, reconnecting, meeting her Grandchildren, Kevin and Samantha, and then her Great Grandson Alex, as well as their extended families and spouses. Darlene always said it was just enough to know that Darren was happy and healthy, but getting to be part of his life was more than she ever expected and treasured as one of her greatest gifts. Darlene also stayed busy in Debra's life helping out with her businesses and jobs � it was Debra's way of keeping her busy but also spending time together. Darlene is preceded in death by her Parents Forrest & Catherine Olson of Kingsburg and her ex-husband, Wyatt Lee "Dutch" Morris of Oakdale. She is survived by her Son, Darren Magill & his Wife Erika; her Daughter, Debra Morris; her Brother, Duane Olson and her Sister Pattie Buck all of Fresno. Her Niece Kristin & her Husband Mark Sanders; Nephew Carl Olson; Grandson Kevin Magill & his Wife Beth & her Children; Granddaughter, Samantha & her Husband Brandon Sabado of Fresno; Great Niece, Gianna Sanders & their Partner Jessie Cruz of San Diego; Great Nephews Brendan Sanders & Hayden Sanders of Fresno and Great Grandson Alex Magill. Mostly all who knew Darlene knew of her love of family, friends, her dogs and her frog collection. Memories may be sent to the family by logging onto www.salseranddillard.com . Visitation will be held Monday, March 7, 2022, from 9:00-10:00 am at Salser & Dillard Creighton Chapel with the Funeral services starting at10:00 AM Monday,also at Salser & Dillard Creighton Chapel, 1588 Lincoln Street, Kingsburg immediately followed by interment at the Kingsburg Cemetery, 12782 E. Clarkson Avenue, Kingsburg and a luncheon at the Kingsburg Historical Park.

The family of Darlene Mae Morris created this Life Tributes page to make it easy to share your memories.

Send flowers to the Morris family.