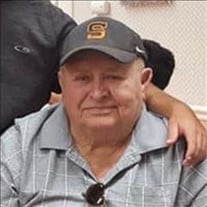 David Lee Dyar July 28, 1935 - November 17, 2021 David Lee Dyar, eighty-six years old of Kingsburg, Ca. passed away peacefully with his family by his bed side at Saint Agnes Hospital in Fresno, Ca. on November 17, 2021. He was born on July 28, 1935, in Delano, Ca. to Cletus & Evelyn Dyar. He was one of five children. He graduated from Delano High School in 1953. After high school he joined the United States Air Force and served in the Korean War. Following his military service, he worked various jobs before he eventually went to work for Delano Flying Service, obtained his pilot's license and became a crop duster. He moved to Selma, California in 1966 where he worked for the California Mosquito Abatement District. He also worked part time at Freeway Lanes where he met his loving wife of thirty-five years, Clara. In 1970 he went to work for Miller Aviation in Kingsburg which he later purchased and re-named Dyar Flying Service. Following his retirement from flying he obtained his General Contractors license and opened Dyar Construction with his brother, Mick. Throughout his life he enjoyed flying, fishing, camping, hunting, bowling, and golfing. He also loved his fishing trips to Alaska with his brother, Mick. He most enjoyed spending time with his family. David was proceeded in death by his wife, Clara; as well as his parents; his son, David Dyar Jr.; his granddaughter, Alyssa Dyar; his sister, Barbara Abbey, his sisters-in-law, Wanda Dyar, Shirley Dyar, and Molly Dyar, and brothers-in-law, David Abbey, and Paul Whisenunt. David is survived by his daughters, Pam (Duane) Britschgi of Fox Island, WA, Sheryl (Steve) Alexander of Delano, Elizabeth (Scott) Raya of Porterville, Michelle (Dan) Barcellos of Selma and Denise Dyar and her boyfriend Neil Erling of Kingsburg, his brothers, Don, Bruce and Mick Dyar, his sister-in-law, Mary Whisenhunt, 13 grandchildren, 18 great grandchildren and numerous nieces and nephews. A viewing will be held on Thursday, December 2, 2021, from 11:00 a.m. to 12:00 p.m., at Salser & Dillard Creighton Chapel at 1588 Lincoln Street, in Kingsburg, Ca. A graveside service will follow at 1:00 pm at the Kingsburg District Cemetery located at 12782 E. Clarkson Avenue, in the City of Kingsburg. A reception will immediately follow at the Selma Mobile Estates Club House located at 2561 Stillman Street, in the City of Selma. Services have been entrusted to Salser & Dillard Creighton Chapel. Memorial Tributes and condolences may be offered by logging onto www.salseranddillard.com.

The family of David Lee Dyar, Sr. created this Life Tributes page to make it easy to share your memories.

Send flowers to the Dyar family.