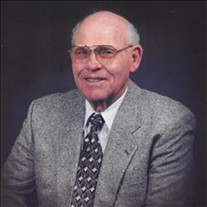 Donald Bruce Olson went to be with his Lord peacefully in the presence of family at the age of 91 on August 11, 2019. He was born on January 9, 1928 to Oscar and Effie Olson in Kingsburg, California. He was one of three siblings with his older sister Bonnie and his younger brother Darrel. He graduated from Kingsburg High School in 1945, and subsequently enlisted and served in the U.S. Coast Guard. Don met the love of his life, Betty Olesen, on October 8, 1950. The two were set up on a blind date by mutual friends. Don and Betty were engaged on Christmas Eve of that year and were the last couple married in the old Easton Presbyterian Church sanctuary on December 8, 1951. They made their home in Kingsburg, where they lived until 1959 when they moved back to Betty's childhood home in Easton. Don and Betty had four children: Janice, Rick, Ralph, and Ray. From volunteering in their 4-H program to coaching baseball, from band to church activities, Don was always very supportive and encouraging of his children. He was also active in their education and served for many years on the American Union School Board. Don was a successful real estate and insurance broker and farmer. In addition to his work, he was a volunteer on the Kingsburg Fire Department for many years. He talked proudly of having driven a new ambulance back from Ohio to Kingsburg and the fire truck that he drove is still used in parades today. He was also an avid San Francisco Giants fan, loved going to his family cabin at Shaver Lake and his beach house in Pismo, and enjoyed fishing and hunting. Don's faith was an important part of his life until the very end and he instilled a strong sense of faith in his entire family. Don was also a Trustee for Easton Presbyterian Church for many years. Don's wife Betty passed away in 1993. He married Gloria Satterberg in November 1995. The couple enjoyed traveling together with church groups and spending time at the coast in Pismo. Don is preceded in death by his brother, Darrel; his wife, Betty; his second wife, Gloria; his grandson, Dane; and his granddaughter, Kimberly. He is survived by his sister, Bonnie; his children Janice (and husband Bob), Rick (and wife Laura), Ralph (and wife Linda), and Ray (and wife Nina); his step-son Larry (and wife Rebecca); grandchildren Nichi, Bobby, Kristen, Russel, Timeri, Taylor, Amanda, Chelsie, Thad, Drake, and Joycelyn; and great-grandchildren Lauren, Emily, Baylie, Dakota, Hunter, Kensie, Adeline, Greyson, and Brooke. Visitation will be held at Salser and Dillard Creighton Chapel Thursday, August 15, 2019, from 4 p.m. to 7 p.m. A Graveside Service will be held at the Washington Colony Cemetery, 7318 S. Elm Avenue, Fresno, CA 93706, at 9:00 a.m., followed by a Memorial Service held at the Easton Presbyterian Church, 5895 S. Elm Avenue, Fresno, CA 93706, at 10:00 a.m. In lieu of flowers donations may be made to the Kingsburg Community Church, 1590 Smith Street, Kingsburg, CA 93631 or the Easton Presbyterian Church, 5895 S. Elm Avenue, Fresno, Ca 93706. A Memorial Tribute may be offered by logging into www.salseranddillard.com.

Donald Bruce Olson went to be with his Lord peacefully in the presence of family at the age of 91 on August 11, 2019. He was born on January 9, 1928 to Oscar and Effie Olson in Kingsburg, California. He was one of three siblings with his older... View Obituary & Service Information

The family of Donald Bruce Olson created this Life Tributes page to make it easy to share your memories.

Donald Bruce Olson went to be with his Lord peacefully in the...

Send flowers to the Olson family.