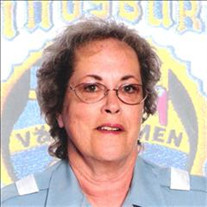 Donna Kay Nelson, 72 of Dinuba, California, died on Tuesday, January 14, 2020, in Dinuba, California. Services have been scheduled with Salser & Dillard Creighton Chapel. Donna was born in Reedley, CA on December 17, 1947 to Tillman and Dorothy Hutchens. One of 7 children, her family moved to a farm in the country outside of Dinuba. She graduated from Dinuba High School in 1966 and married Lowell Nelson on August 12th of that same year. They moved around a bit in their early years, residing in Mojave and then in Bakersfield, where they welcomed their daughter Lisa. In 1977 the family settled down on a little piece of land in the country near Kingsburg. There Donna spent her time gardening, farming raisins, painting ceramics and reading. A fast learner with a can do attitude, Donna worked as a bookkeeper, ran a family ceramic shop with her husband, and was a dispatcher for Kingsburg Police Department. Her 22 years spent with the police department made a lasting impression on the community. She always tried to lend a helping hand and be there for anyone who needed to talk to "Mama Donna". She retired from the police department in 2010. During her retirement she enjoyed spending time with her grandchildren, gardening and reading. Donna passed away at home in the company of her loving family and close family friends. She leaves behind Lowell, her husband of 53 years, her daughter Lisa Swartz & husband Christopher, three grandchildren Nicholas, Zoe, and Eric. Also mourning her passing are her brothers Cecil (Linda) of Raymond CA & Gary (Sharon) Hutchens of Madera Ranchos and her sister Joyce Rytel of Selma. Blessed to be part of a large family, there are several nieces and nephews that will miss Aunt Donna. She was preceded in death by her parents, her brother Harold and sisters Barbara Yarbro and Lorraine Mathiew. A Celebration of Life will be held for Donna at the Kingsburg Train Depot on January 31st at 11:00am. A Memorial Tribute may be offered by logging into www.salseranddillard.com.

The family of Donna Kay Nelson created this Life Tributes page to make it easy to share your memories.

Send flowers to the Nelson family.