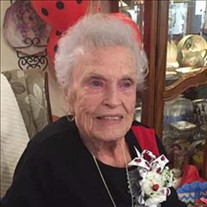 VAUGHAN- Dorothy Mae Vaughan, 91, a resident of Kingsburg, died after a short illness at a Fresno hospital. She was born on the family ranch in Reedley, California on March 22, 1928 to Margaret and John Danielsen. Dorothy graduated from Reedley High School and Reedley Junior College. She married the love of her life, Floyd E. Vaughan who passed away in 1996. She loved to bake pies and was an excellent cook. Dorothy ran the family farm from 1983 through 2001 when she sold it to Dean and Mary Thonesen and was the bookkeeper for her husband's blacksmithing business until it closed in 1990. Dorothy is survived by her daughters Christine M. (Jeffrey) Vaughan-Grant of Fresno, Mary-Margaret (Donald) King of Kingsburg and Step-daughter Sandra (Rodney) Petersen of Fresno. She is also survived by her grand-children Michael (Melissa) Cederquist of ElkGrove, Leigh-Ann (Robby) Olsen of Visalia, Rebecca (Mark) Luplow of Clovis and Alan Petersen of Australia, Donald P.W. King of Texas, Charlie (Angel) King of Texas, Aaron (LeAnn) Grant of Clovis and Matt (Katrina) Grant of Ohio. She is survived by 17 great-grandchildren. Her dear Sister-in-law Margaret Danielsen Hongola, and nephews Lee (Donna) Danielsen of Rancho Mirage, Steven (Janet) Danielsen of Georgia and Marjean (Bill) Seeger of Newport, plus numerous beloved nieces and nephews. She was predeceased by her husband, Floyd Vaughan, her brother Leland J. Danielsen and grand-daughter Dominique King. Dorothy was active in the American Legion Auxiliary Unit 36, Parlier and then in the Kingsburg Unit 191. In the Parlier unit, she was active as Girls State Chairman and in the Kingsburg unit as a two term President and Veteran Affairs and Rehab Chairman. Recently, Dorothy was awarded the Unit of the Year Award by the Kingsburg 191. At the Fresno District Fair, Dorothy designed and worked on the Agricultural fair booth for the Parlier Lion's Club for many years. Her time was not only spent on the design, but by spending countless hours in its creation. As a 91 year member of St. Paul's Lutheran Church in Selma, Dorothy was a faithful member who was baptized, confirmed and married in the church where her grandfather was a charter member. She served faithfully in the Martha's Society as Treasurer and President, member of the Altar Guild, and Sunday School Teacher. Her love of her Lord Jesus Christ was evident in her life and passed that gift to her children and grandchildren. In addition, Dorothy was a member of the Danish American Historical Society of Fresno, Friends of the Kingsburg Depot, and Kingsburg Historical Society. Dorothy was a bright spirit in the lives of many, through the years. She was an avid Dodger fan who stuck by them from Brooklyn to Los Angeles. For a short time, she was a part of the Arabian Horse Association of the San Joaquin Valley. Her Arabian stallion, Saborr, went Top 5 Pacific Slope Champion, Region II Top 10 and was ultimately awarded Legion of Honor at the Santa Barbara Showgrounds. Horse shows brought a lot of pleasure in the lives of Dorothy and Floyd. It allowed them to travel to places they would not have gone. Special thank you to Dr. K.W. Kim, and Dr. Charles Boniske for helping her through her final years. Also, a huge thank you to her special caregiver Abbie Bishop who gave of herself tirelessly to love and care for Dorothy, we will never be able to thank you enough. Thank you to Pastor Mark Wikstrom who faithfully visited her during her time as a shut-in and all of her dear church families at both St. Paul's Lutheran, Selma and Concordia Lutheran, Kingsburg. Visitation will be held at Salser and Dillard Creighton Chapel, Wednesday, December 18, 2019, from 3-7 p.m. A Memorial Service will be held at Saint Paul's Lutheran Church, Monday, December 23, 2019, at 2:00 p.m., located at 2131 Stillman Street, Selma, CA 93662. In lieu of flowers donations may be sent to St. Paul's Lutheran Church LCMS, 2131 Stillman Street, Selma, CA 93662, Concordia Seminary Seminarian Pantry, 801 Seminary Place, Saint Louis, MO 63105-9677 or American Legion Auxiliary Unit 191, C/O Margaret M. Ramirez, Treasurer, 1025 Kern Street, Kingsburg, CA 93631

VAUGHAN- Dorothy Mae Vaughan, 91, a resident of Kingsburg, died after a short illness at a Fresno hospital. She was born on the family ranch in Reedley, California on March 22, 1928 to Margaret and John Danielsen. Dorothy graduated from Reedley... View Obituary & Service Information

The family of Dorothy Mae Vaughan created this Life Tributes page to make it easy to share your memories.

Send flowers to the Vaughan family.