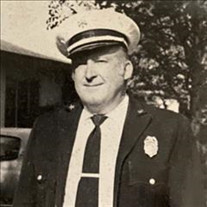 Duane Wallace Turk December 13, 1925 - January 24, 2021 Fresno, California - On Sunday, January 24, 2021 Duane Wallace Turk, loving husband, father, grandfather, great grandfather and friend, passed away at the age of 95. Duane was born on December 13, 1925 in Dinuba, CA. He grew up on a ranch in Kingsburg, CA and attended Kingsburg High School. Duane married Lucile Mae Kroeker in 1948, proposing three months after meeting on a blind date. They celebrated their 72nd anniversary in July of 2020. Duane enlisted in the Navy in April 1943. He was 17-years-old. He served during WWII as an SB2C Helldiver gunner and radioman with Scouting Squadron Sixty-Nine-VS-69. He enjoyed his time in the Navy and was proud of his service as an Aviation Radioman/3rd Class. Once discharged from the Navy he joined the Fresno City Fire Department and retired as a Battalion Chief after 35 years of service. During his life, Duane enjoyed hunting, fishing, camping, boating and spending time with friends and family. He will be remembered for excellent storytelling and love for his family and friends. Duane cherished and loved his wife and could often be seen holding her hand, especially in their later years. Duane loved his children, grandchildren, and great grandchildren and was proud of all their accomplishments. His wife Lucile, 3 children and their spouses; son Daryl Turk of Tampa, FL, daughter Diane Turk West of Clovis, CA, and daughter Kimberly Turk Collins of Fresno, CA, as well as 7 grandchildren, and 20 great-grandchildren survive him. Duane was preceded in death by his beloved sisters Marjorie Turk, Marilyn (Turk) Hanson and parents, Samuel Wallace and Bernadine Hazel Turk.

The family of Duane Wallace Turk created this Life Tributes page to make it easy to share your memories.

Send flowers to the Turk family.