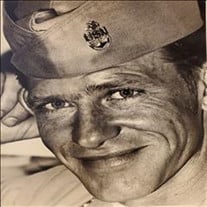 In Loving Memory..... Earl McIntosh, Beloved Husband, Father and Grandfather, 79, of Traver, CA passed away June 15, 2020 Fair Winds and following seas Senior Chief McIntosh. Earl was born May 25, 1941 in Kentucky. He was the son of the Alfred & Nora McIntosh. He served in the U.S. Navy for 20 years and he was discharged with full honors on July 3, 1978. After his service, he worked as a welder and master wood smith. He was an avid fisherman and enjoyed wood working. He also spent time buying storage units and selling his finds to his fellow friends and family in his community. He loved spending time with his children and grandchildren while sipping hot tea and sharing stories of his Naval career. Earl is survived by his beloved wife of 29 years Ida McIntosh, of Traver; his adored children, Shawyn McIntosh, of Tulare, and Beverly Eldridge, of Albuquerque, New Mexico. He was the adored grandfather to Klinda Jimenez, Philip Sellers, Dana Morrison, Kyle McIntosh, William Kirkpatrick, Chasity Hofman, Breezy Lynn, Autem Moya, and Shannon Thurman. He is also survived by 11 great grandchildren, and five sisters, Mary Bevers, Bonnie Brown, Linda McIntosh, Ruth Howard, and June Gater. He was preceded in death by both of his parents, two brothers, two sisters, two sons and one daughter. He will be dearly missed by his family and friends. Visitation will be held from 3 To 6 p.m. Monday, June 22, at Holy Family Catholic Church, In Kingsburg, CA. A Graveside Funeral Service will be held at 11:00 a.m., at Kingsburg Cemetery on Tuesday, June 23. Services have been entrusted to Salser & Dillard Creighton Chapel. Memorial Tributes and condolences may be offered by logging onto www.salseranddillard.com.

In Loving Memory..... Earl McIntosh, Beloved Husband, Father and Grandfather, 79, of Traver, CA passed away June 15, 2020 Fair Winds and following seas Senior Chief McIntosh. Earl was born May 25, 1941 in Kentucky. He was the son of the Alfred... View Obituary & Service Information

The family of Earl McIntosh created this Life Tributes page to make it easy to share your memories.

Send flowers to the McIntosh family.