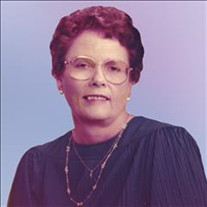 Eileen Hartley was born September 26, 1927 in Hooper, Utah to David Roy Hartley and Edna Annie Fowers. At 93 years old, Eileen passed away peacefully in her home in Kingsburg, California on March 19, 2021, surrounded by her immediate family, husband Arlan Haroldsen, sons Jerry and Larry Haroldsen, and daughter Julie Haroldsen. She is preceded in death by her parents and three of her children, Linda Diane Haroldsen (2 weeks old), John Dale Haroldsen (32 years old), and Ronald Roy Haroldsen (65 years old). Eileen married her high school sweetheart, Arlan John Haroldsen on May 15, 1945 in Nyssa, Oregon. Their first home was a two-bedroom house located one mile from their parents' home. Their first car was a Ford Model A Roadster with a rumble seat in the back. Arlan and Eileen began their family with a little girl, Linda Diane. Their first heart breaking trial was when she passed away two weeks later with complications from pneumonia. One year later in May of 1957, their next child, their first healthy baby boy, Ronald Roy was born. He was the joy of their life for three years and then�TWINS! Jerry Lynn and Larry Dean were born in March of 1950. The family then moved to Boise, Idaho where they remained for 4 years. During their time in Boise, believe it or not, their family was increased by TWINS again! John Dale and Julie Kay were born in May of 1954. After Boise, Arlan's employment took him to Oakland, California where they resided for another 4 years, and then off to Seattle, Washington for 4 years. They were California bound again as Arlan's new assignment was in Bakersfield where they stayed for 3 years. Their dreams of owning their own business came true when Arlan was granted a distributorship from Union Oil. This took them to Kingsburg, California where they resided for 26 years until they retired. Eileen worked part-time as the secretary for their business. After retirement they moved to Squaw Valley, California and lived there for 23 years. Seven years later they returned to Kingsburg. Throughout her life, Eileen's faith, strength, and talents of being a great cook and seamstress blessed her entire family that she loved so much. On occasions when the whole family gathered together, she would always express how grateful she was for all of them. She leaves a legacy of 6 children, 14 grandchildren, 54 great-grandchildren, and 1 great-great-grandchild.

Eileen Hartley was born September 26, 1927 in Hooper, Utah to David Roy Hartley and Edna Annie Fowers. At 93 years old, Eileen passed away peacefully in her home in Kingsburg, California on March 19, 2021, surrounded by her immediate family,... View Obituary & Service Information

The family of Eileen Haroldsen created this Life Tributes page to make it easy to share your memories.

Send flowers to the Haroldsen family.