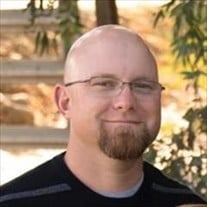 It is with heavy hearts that we share and honor the life of Erin Olsen, of Kingsburg. Erin was suddenly taken from us on January 28, 2022, Erin was 41 years young. Erin and his identical twin brother Neal Olsen were born on May 15, 1980, in Sacramento, CA. Erin is survived by his wife of 15 years Melissa Olsen and their two daughters Annibelle and Brynlee Olsen. In addition, he is survived by his twin brother Neal and wife Chaundra Olsen, Grandparents Leonard and Ruth Olsen, Father Neal Sr. Olsen and Stepmother Mary Evers, brother Eric Olsen, sister Kirsten and husband Joey Le Francois, sister Nicole and husband Dustin Lauffer, as well as many nieces and nephews. Erin graduated from Mt. Whitney High School in Visalia, in 1999. He went on to a 13 year career with New England Sheet Metal and Mechanical Co. Erin devoted himself to his career resulting in many accomplishments as he rose to the level of Foreman, in which he led numerous large commercial projects in the Central Valley. Erin was an extremely hard working man, with integrity and commitment to those he loved, his generosity, work ethic, independence and mischievous sense of humor and laugh. His love for the outdoors is where he spent many of his favorite times, making memories with his family and friends doing what he loved the most, camping, boating, fishing and dirt biking. Erin was a man of all trades and was often called upon to be "Mr. Fix It". He could fix just about anything and renovated, restored and remodeled many projects over the years. Erin had a love of vintage VW Bugs, he owned and worked on several over the years, as well as many other vintage scooters, motorcycles and buggies. Erin will be so deeply missed, he was a wonderful Husband, Father, Son, Grandson, Brother and Friend to so many. He was a pillar of strength to his friends and family, a lifeline to all who knew him and need him, and was an all around standup man. We will miss you Erin, there is no replacing you. A private Celebration of Life will be held at a later date. Services have been entrusted to Salser & Dillard Creighton Chapel. Memorial Tributes and condolences may be offered by logging onto www.salseranddillard.com.

It is with heavy hearts that we share and honor the life of Erin Olsen, of Kingsburg. Erin was suddenly taken from us on January 28, 2022, Erin was 41 years young. Erin and his identical twin brother Neal Olsen were born on May 15, 1980, in... View Obituary & Service Information

The family of Erin Lee Olsen created this Life Tributes page to make it easy to share your memories.

It is with heavy hearts that we share and honor the life of Erin...

Send flowers to the Olsen family.