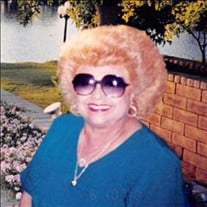 Esther M. Mercer, 82 of Kerman, California, died on Sunday, February 2, 2020, in Fresno, California. Services have been scheduled with Salser & Dillard Creighton Chapel. Esther was born in Fresno, California to Claro and Angela Medrano on June 18, 1937. She is survived by her husband, Stanley Mercer of Kerman, three children Maurice Flores, and his wife Barbara of Reedley, Edward Mercer of Fresno, and Donna Mercer Clark of Kerman, five grandchildren Mathew Flores, Jordan Flores, Steffen Clark, Scott Mercer, Amy Mercer and four great grandchildren. She is also survived by her three sister's Virginia Amador of Fresno, Clara Lopez and her husband Art of Merced and Josie Esqueda and her husband Charlie of South San Francisco. Esther was preceded in death by her parents Claro and Angela Medrano and also her grandson Brandon Flores. A Graveside Service will be held at the Kingsburg Cemetery, Monday, February 10, 2020, at 2:00 pm. A Memorial Tribute may be offered by logging into www.salseranddillard.com.

The family of Esther M. Mercer created this Life Tributes page to make it easy to share your memories.

Send flowers to the Mercer family.