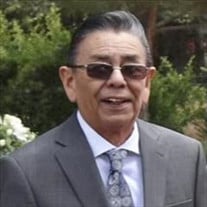 Frank was a devoted husband, father, son, grandfather, and great grandfather. It is with great sadness that the family announces Frank passed away on March 2, 2022 at the age of 73. He passed away quietly at home after a brief battle with cancer. At the young age of 17, Frank joined the United States Marine Corp. He married the love of his life, Kathy, before serving 14 months fighting in the Vietnam War. Upon completion of his military service, Frank began a 40 plus year career in the telecommunications industry, working his way from climbing poles to Western Region Critical Operations Manager. During his career Frank was recognized for his talent and received multiple awards and accolades. Frank's life was filled with energy, laughter, and love. He taught those who he cared about the importance of perseverance and supported us throughout the many accomplishments and difficulties of our lives. He went out of his way to bring people joy and give them a helping hand when needed. His larger than life personality followed him when he entered the room. Frank spent many good times with family and friends. He had a love for the great outdoors, enjoying fishing, camping, hunting, and boating. If he was not outdoors, you could find him watching the Rams on the TV or in a casino playing the slot machines. But his greatest joy was music and dancing with his number one dance partner Kathy who he was married to for 55 years. Frank was predeceased by his parents Frank and Emily Ruiz, brothers David, Harry, and Richard Ruiz. He is survived by his wife Katherine Ruiz, 4 children and spouses, Stephanie and Jerry Box, Jacqueline Ruiz, Denise and Christopher Gates, Robert Ruiz and Amy Huffman; 12 grandchildren and spouses, John Box, Courtney Box, Allison Box, Michael and MJ Rodriguez, Christian Rodriguez, Angelica and Matthew Macias, Robert Ruiz Jr., Emily Ruiz, Ryan Gates, Savannah Gates, Martin Gates and Thomas Gates; 4 great grandchildren Aria Box, Alessa Shade, Sedah Rodriguez and Dahlia Rodriguez; and siblings Jeannette Demay, Diane Jones, DeeDee Ruiz Kezirian, and Stan Ruiz. Viewing will be held 2:00 PM - 6:00 PM, March 15th, 2022 at Salser & Dillard Creighton Chapel, 1588 Lincoln Street, Kingsburg, immediately followed by the Holy Rosary at 6:00 PM also at Salser & Dillard Creighton Chapel. Mass will be held 10:00 AM, Wednesday, March 16th, 2022 at Holy Family Catholic Church, 1275 Smith Street, Kingsburg. Burial will follow at Kingsburg Cemetery. Services have been entrusted to Salser & Dillard Creighton Chapel. Memorial Tributes and condolences may be offered by logging onto www.salseranddillard.com.

Frank was a devoted husband, father, son, grandfather, and great grandfather. It is with great sadness that the family announces Frank passed away on March 2, 2022 at the age of 73. He passed away quietly at home after a brief battle with cancer. At... View Obituary & Service Information

The family of Frank Vincent Ruiz, Jr. created this Life Tributes page to make it easy to share your memories.

Frank was a devoted husband, father, son, grandfather, and great...

Send flowers to the Ruiz family.