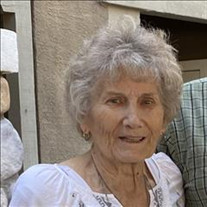 The unequalled energizer bunny Georgeanna Jane Ward Johnson moved on to new adventures on May 20, 2021. On the evening of her death in Gilbert, Arizona, her six children surrounded her bed, coming from across the country to the woman they adored. For decades, her energy to serve God, family, friends, and community left others breathless. Years ago, while working at a nursing home, the staff requested she slow down her walking as she was making the residents dizzy. It's been hard these past months for us to watch her slow down week after week. Georgeanna was born in Twin Falls, Idaho on July 30, 1937, the oldest child of Ross G. Ward and Catherine J. Reilly. Growing up on a farm, she described her childhood as magical. Like her hero Roy Rogers, she could vault her horse running from behind, placing her hands on its haunches and landing in the saddle. Siblings and cousins were favorite playmates. At 18, she took Brigham Young University by storm, becoming the president of the Association of Women Students from 1958-59. After graduation, she earned her certification from Los Angeles' Children's Hospital School of Physical Therapy. In 1962, on a blind date, she met BYU's basketball star, Lloyd Johnson. They married on Dec. 14, 1962. After moving to California, the couple welcomed six children: Aura Lee, Stephanie, Ward, Derek, Aaron, and Katie. Through the years, the family lived in Santa Clara, Modesto, Visalia, landing in Kingsburg in 1972. In 1975, she opened Kingsburg Physical Therapy. Georgeanna became a strong leader and supporter in multiple community organizations, including numerous Swedish Festival committees, KHS Music Boosters, KHS Athletic Boosters, Seawolves Supporter (including serving as its announcer for years), Boy Scout leader, early morning religion teacher, choir director, organizational leader, and for many years, an active member of the local Kiwanis chapter. Johnson parties and celebrations were loved by all for the wonderful food, and more importantly, the love shared. Georgeanna was inclusive in her invitations, there was always room for more. . In 2006, Georgeanna and Lloyd were honored for their dedication to Kingsburg by being selected as the Swedish Festival's Grand Marshalls. Georgeanna is survived by her children: Aura Lee (Garn) Loveland of Mapleton, Utah; Stephanie (Guy) Burgess of Gilbert, Arizona; Ward (Helida) Johnson of Framingham, Massachusettes; Derek (Vicki) Johnson of Meridian, Idaho; Aaron (Alita) Johnson of Cameron Park, California; and Katie (Cody) Smith of Santa Maria, California; 29 grandchildren; 12 great-grandchildren; her brother Grant (Judy), additional brothers and sisters through marriage, numerous nieces and nephews, and even more "adopted family" members who associated with her and her family through the years. She was preceded in death by her husband, Lloyd, granddaughter Kendra, parents and two sisters. Cathy and Patty. A viewing will be held Thursday, June 3 from 6 to 8 pm, at Salser & Dillard Creighton Memorial Chapel, 1588 Lincoln St., Kingsburg. The Celebration of Life will be on Friday, June 4 at 2 p.m. at The Church of Jesus Christ of Latter-day Saints, 2370 Burnham St, Selma. All guests are invited to the supper afterwards to share stories of this irreplaceable woman. In lieu of flowers, the family requests that donations be made to the LDS Humanitarian Fund, at LDS Philanthropies, 1450 N. University Ave., Provo, UT 84604 or give.lds.org/humanitarian which aids people around the world. One hundred percent of every dollar donated is used to help those in need without regard to race, religion, or ethnic origin. Another way to honor Georgeanna is to look for someone in need and offer your helping hands and love. Services have been entrusted to Salser & Dillard Creighton Chapel. Memorial Tributes and condolences may be offered by logging onto www.salseranddillard.com.

The unequalled energizer bunny Georgeanna Jane Ward Johnson moved on to new adventures on May 20, 2021. On the evening of her death in Gilbert, Arizona, her six children surrounded her bed, coming from across the country to the woman they adored.... View Obituary & Service Information

The family of Georgeanna Jane Johnson created this Life Tributes page to make it easy to share your memories.

Send flowers to the Johnson family.