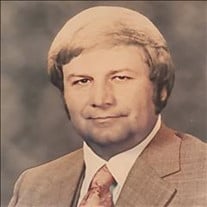 "I'm not signing up for old age next time around," was the oft-repeated mantra in recent years of Gordon F. Peterson, a life-long Kingsburg resident who passed in his sleep on 02 November after 85 years of a life well lived. He was born to William (Bill) and Edna (Beck) Peterson on 23 September 1936 and grew up on the Beck Ranch along the Kings River, where he learned the value and importance of hard work, faithfulness to God and family, and the power and fun of the mighty Kings. Gordon, and his older sister Rowena, attended Kings River Elementary with many of their first and second cousins. He was a proud Viking from the Class of 1954 of Kingsburg High and excelled in football and swimming and enjoyed auto, and ag classes. He played tackle on the 1953 Shasta League Championship football team. He continued his studies in agriculture and engineering at Reedley College and Fresno State, where he enjoyed history classes taught by Kingsburg native and country neighbor Dr. Wallace Smith. After college he completed the carpenter journeyman program. Gordon helped build many homes and apartments in the local area before moving into management positions for large Fresno-based construction firms and focusing on commercial buildings. In the early 1980s he took a leap of faith and started Peterson Construction and had a solid reputation for quality work and the utmost of integrity. In 1957 he met Charlene Guyett of Reedley and the two fell madly in love and married in 1960. They enjoyed nearly 51 years together before Charlene's untimely passing. Besides raising their daughters and supervising their swimming, 4-H, and school activities, the two of them were active members of the Kingsburg Gun Club, Y's Men / Y's Menettes, and the Kingsburg Historical Society. Gordon always had a fascination with aircraft and flying. For several years he served in the Air National Guard in Fresno where he refueled jets and got to hang out with the pilots. He later earned his private pilot's license and the family would fly to in-state destinations for day trips and regular flights to Bass Lake to visit Charlene's parents. In September the focus was dove hunting and later in the fall Gordon would hunt deer and antelope in the nearby mountains as well as out-of-state. After buying a Sanger flat bottom boat the family spent countless hours boating and skiing up and down the Kings�the river in which he spent his childhood. In his retirement from the building industry, Gordon went back to his farming roots growing cherries and selling them at Farmer's Markets in the area. He enjoyed eating the cherries most of all. His home-cured olives were also a treat he shared with many. He and Charlene were active members of the California Heartland Motorhome Club and traveled all over the United States in their big rigs with their new-found friends. They kept upgrading their rig until Gordon finally bought his coveted 40-foot Monaco diesel pusher with slide-outs. Gordon was predeceased by his parents, and wife Charlene. He is survived by daughters Chris Peterson, and Denise Heredia (Eddie), grandchildren Monica (Stuart), and Greg, and great-grandson Lukas. His older sister Rowena Peterson Garabedian also survives him, as does numerous nieces and nephews, and cousins. Visitation (closed casket) will be held from 2-4 pm on Sunday 14 November at Salser & Dillard Creighton Chapel, 1588 Lincoln Street (at the corner of Ellis St.), Kingsburg. A memorial service will take place at 10 am on Monday, 15 November at Creighton Chapel. A luncheon will follow the service at the Kingsburg Historical Park, 2321 Sierra St., Kingsburg. After 85 years of a busy and fulfilling yet unpretentious life, another Viking has gone off to Valhalla to feast on the delights of his Scandinavian heritage. Gordon was proud of his Swedish roots but also grateful to be a patriotic American. He embraced the values and traditions of the "Swedish Village" that was his home his entire life, and celebrated all the good of his forefathers from the old country, which in his mind, meant traditional Swedish lutfisk dinners at Christmas time. The family would like to thank Don Johnson, Russel Anderson, and Alma Jackson Peterson Sweeney and the rest of Gordon's Class of '54 Classmates for their friendship and company throughout his life, and especially the last 10 years. Memorials may be sent to: The Kingsburg Historical Society, P.O. Box 282 Kingsburg, CA 93631, or The Kingsburg Cancer Volunteers, P.O. Box 26, Kingsburg, CA 93631.

"I'm not signing up for old age next time around," was the oft-repeated mantra in recent years of Gordon F. Peterson, a life-long Kingsburg resident who passed in his sleep on 02 November after 85 years of a life well lived. He was born to William... View Obituary & Service Information

The family of Gordon F. Peterson created this Life Tributes page to make it easy to share your memories.

&quot;I&#39;m not signing up for old age next time around,&quot; was the oft-repeated...

Send flowers to the Peterson family.