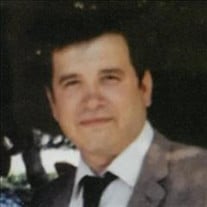 Guadalupe G. Rodriguez, Jr. July 22, 1952 - September 15, 2020 On Tuesday, September 15, 2020, our father and husband, Guadalupe Garcia Rodriguez, Jr. left us to rest in Peace. He passed away at home with his devoted wife, his daughters, and granddaughters by his side. Lupe was born on July 22, 1952 in Los Ramones, Mexico. He was the first born of six children to Guadalupe and Rufina Rodriguez. He met his loving wife, Norma, in 1971 and they began their life together on June 16, 1973. During their 47 years of marriage, they raised two daughters, Nickie and Sophia. Lupe will be remembered for his strong character, his hardworking nature, his incredible ability to fix anything he set his mind to, and his dedication to his family above all else. Lupe was an automotive technician for more than 40 years, including his three years serving in the U.S. Army, from August 1971 to August 1974. Lupe worked at Dutch Chandler Motors in Sanger from 1974-1987 and he worked for Surroz Motors in Visalia from 1987 to 2005. Lupe is preceded in death by his parents, Guadalupe and Rufina Rodriguez. He is survived by his wife Norma Rodriguez, his two daughters, Nickie Acevedo and Sophia Rodriguez, and his two granddaughters, Rebecca Acevedo and Mia Acevedo. Our family wishes to thank Optimal Hospice for all their care and guidance through this difficult time. Their support and compassion have been invaluable. Thank you. We will be gathering to share some of our favorite memories, our stories, to laugh, to cry, and to remember Lupe, who will be greatly missed, on October 10, 2020. His memorial service will be held at Salser & Dillard Creighton Chapel in Kingsburg at 1588 Lincoln Street, Kingsburg, CA 93631 at 3:00 P.M. After the memorial service, family and friends are invited to gather at his home for dinner and a celebration of his life. Services have been entrusted to Salser & Dillard Creighton Chapel. Memorial Tributes and condolences may be offered by logging onto www.salseranddillard.com.

The family of Guadalupe Garcia Rodriguez, Jr. created this Life Tributes page to make it easy to share your memories.

Send flowers to the Rodriguez family.