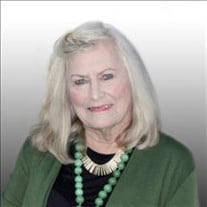 Hilda Ann Warren took her last bow on January 31, 2022 at the tender age of 82. Always funny, frequently irreverent, and unfailingly silly, Hilda knew how to work a room and put a smile on everyone's face. When faced with adversity, she would rise to the challenge and help others along with her. Her sense of humor, rather than making a mockery of the world, illustrated just how much she took life, and the people that filled it, seriously. She knew the benefits of joy and was willing to share it with anyone, whether she'd known them for 10 years or 10 minutes. Hilda began her journey on February 26, 1939 in a small parsonage in Kansas. Growing up as a pastor's daughter, she was raised to be a proper, upstanding Christian woman, but the lessons didn't take. The eldest of four, and ever the troublemaker, Hilda gave her parents a run for their money. After traveling the country with her family making music and developing excellent piano skills, she moved to Kingsburg, California where she found and met the love of her life, Wayne Warren. Married at 17, the summer before her senior year of high school, these hooligans went on a lifelong adventure together, inviting every misfit and gadabout into their home as well as a gaggle of beloved (and often ugly) animals. A devoted mother of four, Hilda knew how to help young people have a good time. A gifted pianist, she shared her love by teaching lessons. With her larger-than-life expressiveness, she tried her hand at being a clown. Committed to sharing her joy of music, she wrote a children's book and founded Swedish Village Music Kids. Hilda cared for every person who came her way, but she reserved the best of herself for the kids in her life. Perhaps this is because she was such a young soul herself. Along with her investment in her family and community, Hilda's resume included a diverse array of roles. She was a store detective for Capwells and Joseph Magnin, a professional model and commentator, hosted a tv show called "Take This Job and Love it" with a diverse guest list, and traveled around the country as a national sales trainer for Lowry Organ Company. In her spare time, she was highly involved in her children's school as the president of the PTA, drama coach, and a fundraiser extraordinaire. Hilda's life with Wayne was not without its challenges. A few months after having their first son, Randall Wayne, he died of SIDS. Rather than allowing this to snuff out her joy, Hilda committed to helping other mothers going through this same pain come out on the other side. When she was diagnosed with breast cancer in her 40s, Hilda committed to praying and supporting other women fighting the same illness and was a charter member of the Kingsburg Cancer Volunteers. When the cancer came back in her 80s along with renal failure, Hilda again fought hard and kept her sense of humor, often to the bemused delight of her doctors and nurses. Like most folks, Hilda had her hard times and her good times, and she made sure she was an active participant in her own story. A committed Christian, Hilda found time to volunteer at church, often playing the piano on Sundays. She loved all types of music, but she was particularly fond of gospel songs. It was a common sight to see her sitting at her piano jamming away to an old hymn or spiritual, and she loved it when her guests joined in. Hilda loved her grandkids and worked tirelessly to embarrass them. Whether it was ribbing them in front of their friends, flirting with their boyfriends, or making a bawdy joke, nothing made her laugh like seeing a grandkid blush. Taking the role of Chief Executive Jokester in their lives, she demanded to be called Grannie Annie Fat Fannie, and loved to serenade them with a shrill and robust cover of "Feelings" by Morris Albert. Hilda loved all types of people, and she insisted on everyone treating people well despite their life circumstances. If anyone needed a spokeswoman or cheerleader, Hilda was the first in line. Having been through hard times herself, she knew the right moment to laugh with someone who needed a break or cry with someone who needed a friend. She'll be missed by all who knew her, but especially by her partner in crime, Wayne, her kids and spouses, Bob & Lynne, Roger & Lorie, and Stephanie & David, her Swedish daughter Maria, her little brothers Bud & Ben, her baby sister Jann, nine grandchildren and their spouses (Braden & Michaela, Josh, Jake & Ashley, Sarah & Brenton, Lanie & Nick, Jordan & Dani, Megan, Randy, & Sam), and eight great grandchildren (Ephraim, Brody, Jackson, Dathan, Tanner, Brooks, Braxton, & Bria). (Written with love by her granddaughter, Megan Grant) Remembrances may be made to: Reedley Full Gospel Tabernacle P. O. Box 876 Reedley, CA 93654 Kingsburg Cancer Volunteers P. O. Box 26 Kingsburg, CA 93631 Graveside services will be held 2:00 PM - 3:00 PM Monday, February 7th, 2022 at Kingsburg Cemetery, 12782 E. Clarkson Avenue, Kingsburg. A Celebration Of Life services will be held 4:00 PM Monday, February 7th, 2022 at The Full Gospel Tabernacle Church, 519 E. 11th Street, Reedley. Services have been entrusted to Salser & Dillard Creighton Chapel. Memorial Tributes and condolences may be offered by logging onto www.salseranddillard.com.

Hilda Ann Warren took her last bow on January 31, 2022 at the tender age of 82. Always funny, frequently irreverent, and unfailingly silly, Hilda knew how to work a room and put a smile on everyone's face. When faced with adversity, she would... View Obituary & Service Information

The family of Hilda Ann Warren created this Life Tributes page to make it easy to share your memories.

Send flowers to the Warren family.