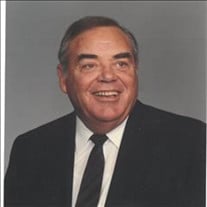 James "Buzz" Myers passed away after a long illness on February 11, 2021 at his Visalia home with his wife, Judy, and brother-in-law, Jeff, at his side. He was born in Reno, Nevada on March 27, 1934 to Alice (Hopper) Myers and Glen E. Myers. Football was his passion from a young age. He graduated from Reno High in 1952 having played on 3 State Football Championship teams. Attended Santa Rosa Junior College. Enlisted in the United States Marine Corps in the fall of 1953. Out of 400 Marines he won a position on the Camp Pendleton football team, playing for two seasons. After an Honorable Discharge he went to work for Bell Telephone of Nevada. He married Karen Harstad and they had 3 children; Dave Steve and Gretchen. He was then employed with Union Oil in Reno, NV. After 5 years at Union Oil they transferred him to Stockton, CA. Eventually owning his own Bulk Plant. Then he was recruited as Executive Vice President for a Stockton based Petroleum Corporation. Buzz loved fishing, hunting and being in the mountains. June, 1970 he took Karen, Dave, Steve and Gretchen on a trip of a lifetime to Alaska. A floatplane from Ketchikan dropped them off in the Tongass National Forest at a 9'X12' cabin on a remote island for a week of salmon fishing, followed by another week of sightseeing in Ketchikan. At the age of 38 he traded security for opportunity to become a Tokay Grape and Bing Cherry grower in Lodi, CA. September, 1979 he married Judy (Harman). They farmed almonds, selling them to Blue Diamond. Buzz even appeared in one of the Blue Diamond "Can a Day" commercials. At the age of 50 he went back to school. Graduating from California Lutheran University with a Certified Financial Planner degree. At the same time he earned his Series 7 New York Stock Exchange license to become a Stock Broker. He retired at the age of 70. Throughout the years he was active in service organizations. Life Member of Masonic Morning Star Lodge #19 Stockton, Stockton Rotary, President Riverdale Lions Club and Riverdale Rodeo Assoc. Survived by his wife Judy of 41 years, son Steve, daughter Gretchen, 6 grandchildren, 6 great-grandchildren, Judy's family, Tag his faithful dog, brother, sister, niece and nephews. We wish to thank the VA, Optimal Hospice and Extra Care for their amazing support, love and compassion. A graveside service will be held at Kingsburg Cemetery on Friday, February 19th at 10:00 am. Condolences may be offered by logging onto www.salseranddillard.com

James "Buzz" Myers passed away after a long illness on February 11, 2021 at his Visalia home with his wife, Judy, and brother-in-law, Jeff, at his side. He was born in Reno, Nevada on March 27, 1934 to Alice (Hopper) Myers and Glen E. Myers. Football... View Obituary & Service Information

The family of James David Myers created this Life Tributes page to make it easy to share your memories.

James &quot;Buzz&quot; Myers passed away after a long illness on February...

Send flowers to the Myers family.