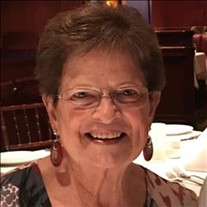 Janelee Volkmann Hammerstrom, 81, of Kingsburg, CA died peacefully at home on January 23, 2021 surrounded by loved ones. Known as Janie, Mom and Mimi, she was born to William "Bill" G. Volkmann, Jr. and Jane Baker Volkmann on October 20,1939, as a member of a pioneer native California family. Her great-great grandfather William Daegner was the first Wells Fargo agent in the historic Sierra foothills town of Columbia from 1865 to 1867. Her great-grandfather, George F. Volkmann, became a partner in 1881 with August Schilling in the coffee, tea and spice business, A. Schilling & Co. The company remained in the Volkmann family until it was sold in 1947 to McCormick & Co of Baltimore. Born in San Francisco, Janie spent her early years living with Granny Volkmann in Piedmont while her father was serving in WWII. Soon after his return from the war, she moved to Selma, CA with her dad and stepmother Orabelle "Willie" Volkmann to their Hacienda de Los Reyes 900-acre homestead raising Black Angus. She attended Selma schools, but returned to San Francisco to attend The Hamlin School for her senior year of high school (while maintaining her lifelong bond with a group of Selma HS women known as the 57 Bunch). Throughout her middle school and high school years, she was an award-winning showman of Hacienda Black Angus cattle. With Willie as her Kings County 4-H leader, Janie became a mentor to many generations of 4-H-ers, helping them fit their cattle and refining their showmanship skills. She passed on her love for showing livestock onto her boys and grandchildren. While attending Fresno State, she met the love of her life, Dennis Hammerstrom, at Jim's Place and they were married in a beautiful ceremony on October 16, 1965. The lovebirds celebrated their 55th wedding anniversary in 2020. She graduated from Fresno State in 1967 with her BS degree in Animal Science and loved her experiences attending semesters at Colorado State and the University of Hawaii. After college and as newlyweds, Dennis and Janie moved to Santa Maria where Dennis was working, and she continued her work as a Traveling Livestock Secretary for the county fairs in Phoenix, AZ, Los Banos, CA and Napa, CA. They moved to Kingsburg in 1968; and shortly thereafter, she and Dennis began a custom harvesting business, Grape Harvester of CA (GHC), a business they co-owned with another family, until they sold it in 1986 so that Dennis could focus his attention on farming stone fruit and grapes. Within a span of 36 months beginning in 1969, Janie gave birth to Bill, Brent and Brad. She was an adored, dedicated, and loving mother to her three boys who gave her a run for her money, but she would not have had it any other way. Her fierce love grew exponentially to include her grandchildren, great grandchild and daughters-in-law. She and her family spent much time on Pine Flat on their "Say W.H.E.N." party barge and at their Shaver Lake cabin. But her happy spot was Cayucos, CA on Studio Drive where she spent numerous summers to escape the Valley heat. She was an adventurous traveler and spent several weeks in Europe after she graduated from high school; she shared her love of travel with Dennis and the two of them travelled the world (favorite trips being to the Panama Canal, Australia, New Zealand, and Tahiti); the United States; and the pro, college and high school rodeo circuits in their beloved RVs. For many years, rodeo was a way of life for the Hammerstrom household. Dennis and the boys competed at the high school, college, pro and senior levels; and Janie was always there with support. She took an active leadership role in CA HS Rodeo Assoc. (CHSRA)-District 6 through most of the boys' high school years and became a "rodeo mom" to many. They made their annual trek to the NFR a family affair as it was an event that they all truly loved. The friendships that were forged in the arenas have remained strong to this day. Ever the consummate hostess, their home was always open to family, friends and her kids' friends which often included a stray cowboy or two. Everyone always knew they would be heartily fed with a bloody steak, more hors d'oeuvres than humanly possible to eat and a drink or two. Janie served as 76-77 President of Junior League of Fresno; Valley Children's Hospitals Board of Trustees, 76-84; a member of VCH's Selma Guild; served on the board of Kings River College (now Reedley College); a member of Kappa, Kappa Gamma (Delta Omega Chapter, Fresno State); member of California Women of Agriculture; District 6 Rodeo Secretary from about 85-90, and was the District 6 CHSRA State Board Representative; a member of the Kingsburg Measure B Ad Hoc Committee (81-83) responsible for the development of the City of Kingsburg/KHS pool; and was awarded in 58 the 4-H California Diamond Star award (the highest 4-H achievement) and was a National 4-H Conference delegate. She is survived by her loving husband of 55 years, Dennis Hammerstrom; son, William Hammerstrom and his wife Karri of Kingsburg, CA; son, Brent Hammerstrom of Kingsburg, CA; son, Bradley Hammerstrom and his wife Jennifer of Tracy, CA; seven grandchildren: Macey & Cy, Devon & Austen, and Bailey, Grace & Wyatt; great-grandson Grayson Tennies; brothers-and sisters-in-law: Sue Hammerstrom of Vancouver, WA; Doug and Diane Hammerstrom-Harris of Fort Bragg, CA; Yvonne and Terry Turner of Washougal, WA; and Connie Lindsay of Colts Neck, NJ; Volkmann cousin, Barbara G. Mudler of Brookhaven, GA; and many, many Carter cousins and Hammerstrom nieces and nephews. To celebrate the amazing wife, Mom, Mimi, and friend she was and will be forevermore, a Celebration of Life for Janie will be held in the Spring. The family wishes to thank everyone for the outpouring of love, prayers and support they have received. Services have been entrusted to Salser & Dillard Creighton Chapel. Memorial Tributes and condolences may be offered by logging onto www.salseranddillard.com.

The family of Janelee Volkmann Hammerstrom created this Life Tributes page to make it easy to share your memories.

Send flowers to the Hammerstrom family.