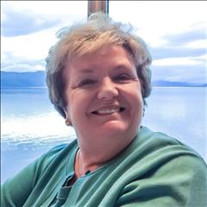 Janet Jean Berry passed on February 27, 2021. She was born on June 23, 1947 in Fresno, California to Walter and Martha Koop. Janet graduated from Caruthers High School in 1965 and lived in the Central Valley of California her entire life. Janet had two children from her first marriage, Lora and Dan. She was remarried on June 17, 1978 to Don Berry and happily accepted Richard Berry, her second son, into the family. Janet was a fantastic homemaker and CEO/Secretary of Don Berry Construction, Inc. from its inception in 1980 until her death. Janet had a deep love for family and cherished the time they would spend together cooking, gardening, and playing board games. Janet's famous dishes included Twice Baked Potatoes, Peach Cobbler, Potato Salad, and Cherry Berry on a Cloud. She would make Cherry Berry for many birthday celebrations. Janet and Don enjoyed many years of sailing, skiing, boating, auto-racing, and traveling; which took them to amazing places like New Zealand, The Virgin Islands, Aspen, Vail, Spain, and Alaska. They made many lifelong friends along the way. Janet spent many days at their Shaver Lake home as well as their Villa in Baja, Mexico. She loved spending time with her children and grandchildren in Shaver Lake and Mexico playing board games. Her favorite game was Mexican Train Dominoes, which she would beat her children and grandchildren at frequently. Janet was also an avid gardener who especially loved flowers and succulents. She was a master seamstress and enjoyed knitting, quilting, and fixing her grandchildren's clothes when they were stained or ripped. Finally, she had a passion for genealogy spending much of her personal time doing research and tracing back her family's roots. Services have been entrusted to Salser & Dillard Creighton Chapel. Memorial Tributes and condolences may be offered by logging onto www.salseranddillard.com.

Janet Jean Berry passed on February 27, 2021. She was born on June 23, 1947 in Fresno, California to Walter and Martha Koop. Janet graduated from Caruthers High School in 1965 and lived in the Central Valley of California her entire life. Janet... View Obituary & Service Information

The family of Janet Jean Berry created this Life Tributes page to make it easy to share your memories.

Send flowers to the Berry family.