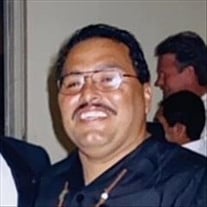 �Jesse Aguirre December 8, 1964 - January 20, 2022 Jesse Aguirre peacefully passed away from this life leaving behind many broken hearts on Thursday, January 20, 2022. Jesse was 57 years old and happily married to Aletha Robinson. Jesse was born in San Pedro, Coahuila, Mexico. When Jesse was five years old he migrated with his beloved parents Alfredo and Maria Puentes to Clovis, California. Where he attended Weldon Elementary and Kastner Intermediate Schools. While at Kastner Jesse was asked to try out for the wrestling team Jesse quickly picked up the technique of wrestling. Soon after Jesse moved from Clovis to Selma where he continued wrestling. In Selma Jesse was named the Tasmanian Devil for his fast and powerful outburst, to this day Jesse is remembered as one of the greats to have wrestled for Selma High School. After graduating Jesse moved again to Kingsburg, California. There Jesse met his soul mate Aletha Robinson. The two love birds were regulars at the Kingsburg gym. Jesse power lifted while Aletha worked on her cardio. Soon after Jesse and Aletha began attending the Kingsburg Baptist Church. Jesse was baptized and began his journey serving the Lord. Jesse will forever be remembered for his sense of humor, his devotion to serving the Lord and church. His weekend getaways to the coast with Aletha. But most of all the heart of God he was blessed with. Jesse's family would like to thank the Kingsburg First Baptist Church for taking in our brother and guiding him on the right path. Thank you until we meet again. Viewing will be held from 2:00 PM - 6:00 PM Thursday, January 27th, 2022 at Salser & Dillard Creighton Chapel, 1588 Lincoln Street, Kingsburg. A Funeral services will be held at 11:00 AM Friday, January 28th, 2022 at First Baptist Church, 1615 Draper Street, Kingsburg immediately followed by interment at Kingsburg Cemetery, 12782 E. Clarkson Avenue, Kingsburg. Services have been entrusted to Salser & Dillard Creighton Chapel. Memorial Tributes and condolences may be offered by logging onto www.salseranddillard.com.

The family of Jesse R. Aguirre created this Life Tributes page to make it easy to share your memories.

Send flowers to the Aguirre family.