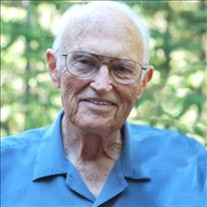 John was born in Lindsay CA on October 13, 1921, to Hawley and Leona Adams. He was the 4th of 6 children, one of which did not survive infancy. He graduated from Lindsay High School in 1940, then went on to COS in Visalia. He drove a bus for COS and picked up students in Strathmore and Lindsay, where he met our mom, Marjorie. At COS he enrolled in the Civilian Pilot Training program, designed to usher pilots into the US military just prior to WWII. When the war broke out John joined the navy and flew multi-engine transports around the southwest and the Pacific theater. He and mom were married in December of '43 while he was stationed in Indiana. After the war, the family began to grow and they lived in Strathmore for two years while he worked in his father-in-law's business, Strathmore Machine Works. They moved to Kingsburg in 1950 with four kids and Dad worked for Drake Steel in Fresno as an area salesman. After five years he began another career of selling mutual funds. Always the inventive type, he invented a circular pipe cutter in the 60s. In 1971 he invented an anchor bolt holder for the construction industry and over the next 40 years sold about a million of them. In 1980 he invented the Handle Saver, which saved axe handles and other tool handles from breaking. All of the kids and grandkids had experiences helping him lable and ship those items which made for good family memories. Somewhere around a million Handle Savers were also sold. He also had other inventions, the Unreel, a hose holder, and a few other minor items. Marjorie died in 1994, and in 1996 John married another Lindsay schoolmate, Patty Honey. They were married for seven years before she died suddenly in January, 2004. In October of 2004 he married another Lindsay schoolmate, and his sister-in-law's sister, Jean Asher of Dinuba. They were married for 14 years before her death in 2018. In 2006 our brother Gary died of brain cancer, a tragic day for us all. One of John's retirement activities was wanting to thank people who had been in his life. He began making wooden plates on a lathe out of zebra wood, with a brass inscription on the back. Over the next several years he made and gave away over 200 beautiful wooden plates. By his early nineties he quit making plates, saying "I can't think of anyone else to give one to, and its too hard to think about." His last wish for his life was that he would not live to see his 100th birthday. He got his wish after 99 years and 4 months. We are so grateful for the simple and painless way he passed. As family members we are forever grateful for his kindness and love. We realize he was a very unique and special man. Our hope is that we can live up to a little bit of the example he set for us.

John was born in Lindsay CA on October 13, 1921, to Hawley and Leona Adams. He was the 4th of 6 children, one of which did not survive infancy. He graduated from Lindsay High School in 1940, then went on to COS in Visalia. He drove a bus for... View Obituary & Service Information

The family of John Adams created this Life Tributes page to make it easy to share your memories.

Send flowers to the Adams family.