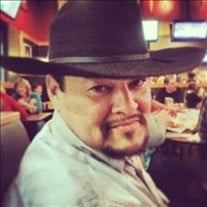 John Urias, 59 of Kingsburg, California, died on Sunday, October 17, 2021, in Hanford, California. John was born to John Hernandez Urias and Amparo Guerrero on June 20, 1961. Beloved husband, son, father, brother, grandpa, cousin and great friend John Urias, died on October 17, 2021, from complications of Covid. Johnny was born in Hanford, CA. on June 20, 1961. He was the first born of three boys to John H. Urias and Amparo Guerrero Urias. He lived his life on his terms. Johnny became the foundation of our family after the passing of our Dad. At an early age, the family moved from Hanford to Bakersfield where Johnny attended elementary and junior high school. It was during these early years when he learned the trade that he's been practicing for over 40 years. He was a tile setter. In March of 1977 the family moved to Cutler, CA. where John was a freshman at Orosi High School. Johnny was a bit on the shy side believe it or not but made many friends. Johnny played football and basketball in high school. Summers were spent working a John Auto Parts, whee it was easy to get a job but just as easy also to get laid off since the business was owned by our Dad. Johnny graduated with the class of 1980. Johnny met his future wife Diane at a chance meeting around the time Johnny was 21. Then fate brought them together for good in 1996. Johnny married Diane Aceves on November 15th 1997. Diane brought two beautiful children with her which Johnny loved as his own, Jessica and Jordan. In 1998, they brought Jesse James home. Together Johnny and Diane raised their three kids. Johnny worked for numerous tile companies along the way but eventually decided to go his own way and in 2005 he started his business, Johns Custom Tile. A business that Johnny worked Very hard for and was very proud of. His work was impeccable. Johnny had tremendous work ethic and worked very hard to get ahead in life. He spent most days working and was very proud of his work. Work was a huge part of his life. He worked all over the area and beyond. The last job he worked on was a beautiful home at Pebble Beach. Johnny attended the Catholic Church. Johnny and Diane loved to travel. The often took weekend trips with their friends. Johnny also loved to cook and barbecue. He loved having friends over to his house where he and Diane would make sure everyone had a great time. Johnny was a very compassionate, caring man with a huge heart. He loved his wife, kids and grandkids with all he had. Johnny also had a passion for Golf and played often. Johnny U-turn, as some of his friends knew him, had a great sense of humor and could always be counted on to make us laugh. If you were able to see some of his facebook live performances, you know what I mean. Johnny was a fan of the San Francisco Giant's baseball team and was a huge bears fan, both Chicago and Selma, cheering proudly for his boys Jordan and Jesse when they played football for Selma. Johnny also loved country music. He loved to sing out loud with favorites George Strait, Mearl Haggard, George Jones and Dwight Yoakham. Most of all he loved being with his family and friends. Enjoying the day and whatever came with it. Johnny will be missed greatly. He is survived by his Wife of 24 years Diane Urias, Mother Amparo Guerrero Urias, Daughter Jessica Brown, Sons Jordan Allen and Jesse James Urias, Brother Anthony Urias, Sister-in-law Meri Urias and Sylvia Urias. Grandkids Sebastian and Karisma. Along with numerous loving Uncles, Aunts and cousins. Johnny was preceded in death by, Grandfather Rito Gurrero, Grandmother Epifnia Guerrero, Grandmother Adela Urias, Grandfather Antonio Urias, Brother Alan Urias, Father John H. Urias Sr. Aunt Mary Cervantes and Uncle Manuel Guerrero. Viewing will be held 2:00 PM - 7:00 PM Thursday, October 28th, 2021 at Salser & Dillard Creighton Chapel, 1588 Lincoln Street, Kingsburg with the Rosary held at 6:00 PM, also at Salser & Dillard Creighton Chapel. A Mass of Christian Burial services will be held 10:00 AM Friday, October 29th, 2021 at Holy Family Catholic Church, 1275 Smith Street, Kingsburg immediately followed by Interment at Smith Mountain Cemetery, 42088 Road 100, Dinuba. Services have been entrusted to Salser & Dillard Creighton Chapel. Memorial Tributes and condolences may be offered by logging onto www.salseranddillard.com.

The family of John Urias created this Life Tributes page to make it easy to share your memories.

Send flowers to the Urias family.