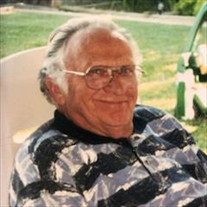 John J. "Jack" Woods, 91 of Kingsburg passed away peacefully on June 12, 2019 at Hinds Hospice in Fresno. "Jack" was born on July 26, 1927 in Redwood City, California to William and Sarah Woods. He was the second of three children. The family moved to Tehachapi, California prior to his first birthday. He attended school there and graduated from Tehachapi High School. Shortly after graduation, in 1944, Jack enlisted in the Navy, where he rose to the rank of Seaman Second class. After completing his military service, he began his 35 year career with Cal Trans. He relocated to Kingsburg where he met and married "the love of his life", Carolyn Erickson. They married June 18, 1949 and enjoyed 65 years of marriage before Carolyn passed June 19, 2014. They had three children, John Jr., David, and Pegge. Jack was very active in the local Y's men club for many years. Jack loved camping and he and the family would annually vacation in Yosemite, where he was known as "the Marshall of Camp 14". They also enjoyed the family home in Cayucos for many years. Jack was also a charter member of the Kings River Golf and Country Club. Jack was very handy and able to fix anything! Both Jack and Carolyn loved to spend holidays, especially Christmas, with their children, grandchildren and great-grandchildren. They had a talent for making the holidays very special for all. More recently, Jack loved to have Thursday morning breakfast with his children, grandchildren and great-grandchildren. Jack was preceded in death by his parents, and his brother Bill. Jack is survived by his sister Donna Jean and his adult children, John Woods Jr., and wife Sheila; David Woods and wife Irma; and Pegge Loven and husband Brian. Jack is also survived by grandchildren, Joshua Woods and wife Erin; Christopher Woods and wife Carly; Jennifer Woods; Jeffrey Loven and wife Eve; and Emily Suria and husband Hector. Jack leaves behind 8 great grandchildren with another on the way. Armen and Elias Woods; Posey Woods; Josiah, Jericho, Noelle, and Jeffrey Loven; and Joanna Suria. "Grandpa Jack" will be deeply missed by his entire family. A graveside service will be held at the Kingsburg Cemetery on Thursday, June 20, 2019, at 10:00 a.m. Tributes and condolences may be offered by logging onto www.salseranddillard.com.

John J. "Jack" Woods, 91 of Kingsburg passed away peacefully on June 12, 2019 at Hinds Hospice in Fresno. "Jack" was born on July 26, 1927 in Redwood City, California to William and Sarah Woods. He was the second of three children. The family... View Obituary & Service Information

The family of John Joseph Woods created this Life Tributes page to make it easy to share your memories.

Send flowers to the Woods family.