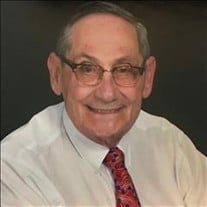 Joseph Louis Vallenari of Kingsburg, California passed away on Saturday September 28, 2019 at his home surrounded by his family. He was 85 years old. Joseph was born in Corona, California on March 6, 1934. He was the son of Italian immigrants John and Pauline Vallenari. Joseph graduated from San Jose State University in 1955 and was commissioned a Second Lieutenant in the United States Air Force. He served his country for 28 years and his career took him all over the world to include service in Vietnam and tours in Canada, Bolivia and Spain. He retired having achieved the rank of Lieutenant Colonel. He was a highly decorated officer and a deeply patriotic man. After he retired, he settled in Roseville, California and recently moved to Kingsburg to be near his youngest daughter, Laura. Joseph is the loving father of Greg Vallenari (Barbara) of Denton, Texas, Steve Vallenari (Nanette) of Denver, Colorado, Lisa Lindman (David) of Fayetteville, North Carolina, Laura Vallenari of Kingsburg, California and Janine Bertelsen (David) of Scotts Valley, California. Joseph was blessed with many grandchildren, great grandchildren, nieces and nephews. He had a loving bond with his sister-in-law, Maggie Vallenari of Sedona, Arizona. Joseph was preceded in death by his brother Frank Vallenari of Sedona, Arizona, his wife Millie Vallenari (1986) and wife Gen Vallenari (2019). Joseph loved to cook and was known for being the master of the Weber grill - grilling in any kind of weather. Joseph loved sharing his silly jokes with his family, gardening in his yard, tending to his roses and sitting down to enjoy his backyard water fall. He was also an avid fan of classic cars and vintage aircraft. He loved to fish, but he was better at catching ducks and shoes than anything else. Joseph remained a devout Catholic Christian throughout his life. The visitation will be held at the Salser & Dillard Creighton Chapel in Kingsburg, California on October 6th from 5:00 to 7:00 p.m. with the Rosary being prayed at 6:00 p.m.. A Mass of Christian Burial for Joseph will be celebrated at Holy Family Catholic Church in Kingsburg, California on October 7th at 9:00 a.m. Following the Mass, Joseph will be buried with full military honors at the San Joaquin National Cemetery in Santa Nella, California on October 7th at 2:30 p.m. In lieu of flowers, donations can be made to the Wounded Warrior Project at www.woundedwarriorproject.org or the Tulare Kings Right to Life at www.tkrl.org. Tributes and condolences may be offered by logging onto www.salseranddillard.com.

Joseph Louis Vallenari of Kingsburg, California passed away on Saturday September 28, 2019 at his home surrounded by his family. He was 85 years old. Joseph was born in Corona, California on March 6, 1934. He was the son of Italian immigrants... View Obituary & Service Information

The family of Joseph Louis Vallenari created this Life Tributes page to make it easy to share your memories.

Joseph Louis Vallenari of Kingsburg, California passed away on...

Send flowers to the Vallenari family.