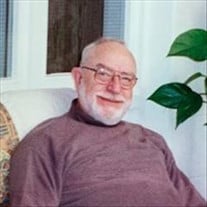 Keith Goble January 17, 1936 - March 18, 2022 Keith Lynn Goble was born on January 17, 1936, into the loving home of Alice and Myles Goble in Kingsburg. He was youngest of three children having two older sisters Marjorie (Goble) Manning and Joanne (Goble) Bennett. He grew up and went to school in Kingsburg and attended Concordia Lutheran Church. His father the local Postmaster, Barber and accomplished story teller. While his mother maintained the home and played piano fostering his life long love affair with music. In the 1950's he attended college at Fresno State where he majored in Music while he served his country here at home in the Naval Reserves. He became choir director at Concordia Lutheran Church and met and married Mary Jean Travland in 1960. In 1966 they moved to Fresno so Keith could find work as a Social worker and they could start their family. They had three children; Bethany, Christopher and Jennifer. Keith went to night school to gain a Master's in Social Work. He continued to pursue his musical interests by joining a Dixieland Jazz band; The Fresno Statesmen and a local brass quartet. He worked for Fresno County as a Licensed Clinical Social Worker for 37 years and retired to travel the U.S. with his wife. Then later in life, at different times, he traveled with his sisters Joanne, Marjorie and sister-in-law Beverly Nelson. Outside of the continental U.S. he visited: France, Ireland, Scotland, Italy, Germany and Switzerland. he also made it to Alaska and Hawaii. His love of music and learning made travel and experiencing other cultures one of the true joys in his life. He was preceded in death by his son, Christopher David Goble (who lived only a few weeks) and in 1997 his wife Mary. He leaves behind his sister Joanne Bennett, his two daughters Bethany Goble and Jennifer (Goble) Zavala, a granddaughter Riley Zavala, a son-in-law Roderick Zavala and many nieces, nephews, cousins and friends who will miss him dearly. Church services will be held at Concordia Lutheran Church in Kingsburg at 10:00 am on April 8, 2022. Followed by a Graveside Service at the Kingsburg Cemetery, 12782 E. Clarkson Avenue, Kingsburg. The family asks that in lieu of flowers, if you feel led to donate, please donate in his name to a no-kill animal shelter of your choosing. Services have been entrusted to Salser & Dillard Creighton Chapel. Memorial Tributes and condolences may be offered by logging onto www.salseranddillard.com.

Keith Goble January 17, 1936 - March 18, 2022 Keith Lynn Goble was born on January 17, 1936, into the loving home of Alice and Myles Goble in Kingsburg. He was youngest of three children having two older sisters Marjorie (Goble) Manning and... View Obituary & Service Information

The family of Keith Lynn Goble created this Life Tributes page to make it easy to share your memories.

Send flowers to the Goble family.