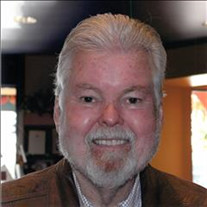 Kenneth Gary Crabtree 4-9-1944 - 10-21-2020 Kenny Crabtree passed away October 21, 2020 after a long battle with Parkinson's Disease and related illnesses at 76 years of age. He was known by his early family as "Gary," and to others as "Kenny" or "Ken." He lived in Fresno County all of his life, but Selma was his birth city. Kenny was the first son of Kenneth Alexander Crabtree, known as "Pete" and Sybil Reed Crabtree, who lived in Kingsburg. Pete was a farmer, and Sybil, a housewife. Kenny was preceded in death by his parents and younger brother, Lawrence. He was also preceded in death by his second wife, Beth Fansler, in 2012, stepdaughter, Kellie Lynn Pottorff in1988 and stepson, Sean Pottorff in 2020. Kenny graduated from Kingsburg Joint Union High School where he excelled in Speech and Debate, then onto Reedley Community College and Fresno State University where he graduated with a Bachelor of Arts in Literature in 1970. He served in the National Guard stationed at Ford Ord, California. Eventually Kenny was hired by Fresno County Planning Department where he worked over ten years learning the ropes of property development. From there he went on to private development work with Randy Hill Homes, Benchmark Communities and others as a Land Acquisition specialist. Kenny and Beth were generous supporters of many charities including Fansler Foundation, CSUF, the Christmas Toys Giveaway for Orange Cove children, Buddies Bandits, Smile Train and others. Over the years, Beth's family became Kenny's family, which included her step mother, Marlene Malan Fansler and Beth's four siblings, Paula Fansler, David Fansler, both of Fresno, Leigh Anne Gurtov of Hawaii, and Ward Fansler of Truckee, along with their spouses and grandchildren who lovingly referred to him as "Uncle Kenny." Kenny and Beth had no children of their own, but rescued many dogs who they dearly loved and spoiled. Kenny will be laid to rest in a graveside service at 10:00 a.m. on Monday, November 16, 2020 at Kingsburg Cemetery 12782 E. Clarkson Ave. by Salser and Dillard Creighton Chapel Funeral Directors. Services have been entrusted to Salser & Dillard Creighton Chapel. Memorial Tributes and condolences may be offered by logging onto www.salseranddillard.com.

Kenneth Gary Crabtree 4-9-1944 - 10-21-2020 Kenny Crabtree passed away October 21, 2020 after a long battle with Parkinson's Disease and related illnesses at 76 years of age. He was known by his early family as "Gary," and to others as... View Obituary & Service Information

The family of Kenneth Gary Crabtree created this Life Tributes page to make it easy to share your memories.

Send flowers to the Crabtree family.