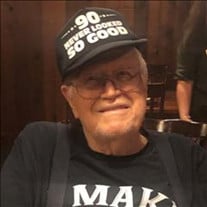 Larry Workman, 90, of Kingsburg, passed away peacefully into the arms of Jesus on Friday, February 28, 2020. Larry's passing was just the way he wanted it, at home and surrounded by his family and loved ones. Laurence Alton Workman Junior was born in Hanford on September 21, 1929, to Laurence and Marie Workman. They lived in Hanford until 1935 when their house burned to the ground. Shortly there after they relocated to their ranch in the island area of Kingsburg where Larry grew up. Larry first attended Riverbend school, which also was located in the Island Area, and from there attended all of Kingsburg public schools, graduating from Kingsburg high school in 1947. He grew up a farm boy, working hard on the ranch with his dad from the age of eight years old. He milk the cows every morning before he went to school and every evening when he got home. These were some of his favorite stories to tell. Larry played football for Kingsburg high school all four years, and then went on to play for the 1947 championship football team at Reedley College. Larry played on two baseball teams for the city of Kingsburg right after High School, one of them called the Slough Water Sluggers, and the other the Kingsburg Saints. Larry was quite an athlete, and loved playing team sports. He went on to coach Pop Warner football for many years later in life. He and his wife Carole were very active in the swimming careers of their children, The Kingsburg Seawolves, and Mid Valley Swim Club. Larry enlisted in the Air Force when he was 20 years old in 1951, and served in the Korean War. He was very proud to have served his country and to be a US veteran. When the war was over, he returned to the US and was stationed in Charleston South Carolina, where he met his bride Carol Nelson. They married in 1955 and returned to Kingsburg where they made their home. They had five children, Penny, Holly, Lance, Scott, and Hal. Larry eventually went to work for the California state department of rehabilitation in 1963. He worked there until 1990, when he retired to farming. In 2008, Larry received a call from Riverbend Church to fill the pulpit. Thrilled to help out at the church he grew up in, Larry preached nearly every Sunday until 2013 and retired only because his eyesight was getting so bad. Larry was preceded in death by his son Scott in 1981, his Parents, Laurence and Marie, his granddaughter, Whitney in 2004, and his beloved wife Carole in 2019. Our family rejoices in that glorious reunion! We would like to thank Dr. Luis Guzman and Adventist Hospice Care for the incredible care that they provided for our father. A Memorial Service will be held for Larry at the Kingsburg Community Church at 10am, March 13, 2020, with luncheon to follow. Memorial gifts may be sent to the Riverbend Church, P.O. Box 266, Kingsburg, California. Services have been entrusted to Salser & Dillard Creighton Chapel. Memorial Tributes and condolences may be offered by logging onto www.salseranddillard.com.

Larry Workman, 90, of Kingsburg, passed away peacefully into the arms of Jesus on Friday, February 28, 2020. Larry's passing was just the way he wanted it, at home and surrounded by his family and loved ones. Laurence Alton Workman Junior was... View Obituary & Service Information

The family of Laurence Alton Workman created this Life Tributes page to make it easy to share your memories.

Larry Workman, 90, of Kingsburg, passed away peacefully into...

Send flowers to the Workman family.