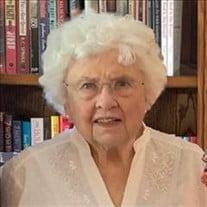 Laurice Annette Bonander Laurice was born on May 29, 1930 to George Russell Frasher and Laurice Fern Frasher in Los Angeles California. She passed into eternity on February 13, 2022 at the age of 91. She is survived by her daughter Kathleen Atchley and her husband Tom of Kingsburg and daughter-in-law Debbie Bonander of Little Elm, Texas. She is also survived by seven grandchildren: Emily Lentz and husband Joel, Matthew Bonander and wife Sara, Ruth Cairns and husband Thomas, Joey Bonander, Scott Bonander, Darrah Bonander, and Tiffani Canepa and by eight great-grandchildren. She was preceded in death by her husband of 56 years Merrill Bonander and her sons David Bonander and Darol Bonander. Laurice was named after her mother who died at childbirth. She was taken into the loving families of her father's brother and then her mother's sister during her first years of life. Her father then employed live-in housekeepers and brought her to San Jose to live with him. The influence of a housekeeper, Aunt Vera, gave her an early introduction to Christian love and gospel truths. Her father took her to attend First Baptist Church of San Jose as a young girl though he himself did not attend. At a church camp in the Santa Cruz mountains God called Laurice to faith and she began her new life in Christ. A few years later her father came to Christ and began his own walk of faith. In her high school years there was no longer a need for housekeepers as Laurice took on the role of the "woman of the house" keeping the home neat and tidy and cooking for she and her father. After high school she attended San Jose State College where she met and married Merrill Bonander on July 1, 1950. Over the next years they moved from San Jose to Turlock (where Laurice taught school for a year), from Turlock to Fresno (where Merrill taught school and was a principal), from Fresno to Berkley (where Merrill attended Optometry School at the University California) and from Berkley back to Fresno where Merrill opened an optometrist office in Fig Garden. In these first years of many changes they had their three children Darol, Kathleen and David. In 1962 Merrill opened an optometry practice in Selma and Laurice and family moved to Kingsburg where they have lived since. Laurice belonged to the local Tuesday Club and attended a community-based Bible study as of late. She loved meeting for breakfast or lunch with a small group of other widows for good social time, encouraging laughter and spiritual sisterhood. Earlier, she joined her husband Merrill in many civic activities and clubs which connected her with many in the Kingsburg community. She has been a member of the Kingsburg Evangelical Free Church (Orchard Bible Fellowship) for nearly 60 years where she served the Lord by caring for others. In her church Laurice was known as kind and loving always ready to meet needs observed. Being generous with her time she loved baking cookies and delivering them to those who needed encouragement and love. Along with the baked goods she would deliver God's Word; Scripture appropriate to the need of the moment. She recognized that God's Word provided all the answers to life's questions so she consistently gave out biblical reading material to neighbors or mailed them to those far away. Laurice also was generous with finances always helping those less fortunate or giving to Christian missions work around the world. She was always quick to credit Christ's work in her pointing all glory to Him. Her circle of family and friends will miss her and are thankful that she is safely in the presence of the Lord. Graveside services will be held 10:00 AM Friday, March 4th, 2022 at Kingsburg Cemetery, 12782 E. Clarkson Avenue, Kingsburg. Memorial services will be held 11:00 AM Friday, March 4th, 2022 at The Orchard Bible Fellowship Church, 2400 19th Ave, Kingsburg. Services have been entrusted to Salser & Dillard Creighton Chapel. Memorial Tributes and condolences may be offered by logging onto www.salseranddillard.com.

Laurice Annette Bonander Laurice was born on May 29, 1930 to George Russell Frasher and Laurice Fern Frasher in Los Angeles California. She passed into eternity on February 13, 2022 at the age of 91. She is survived by her daughter Kathleen... View Obituary & Service Information

The family of Laurice Annette Bonander created this Life Tributes page to make it easy to share your memories.

Send flowers to the Bonander family.