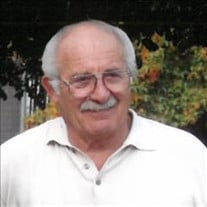 Louis Albert Bertelli passed away May 7, 2022, in Kingsburg, California after a lengthy illness. Louie was born in Salinas, California on October 11, 1932, to Antonio Bertelli and Perina Querin Bertelli and raised on the family artichoke farm in Castroville. He attended Castroville Grammar School and graduated from Salinas High School in 1951. He served in the United States Navy from 1951 to 1953. He was a partner in Bertelli Brother Manufacturing Inc. of Castroville as a designer and manufacturer of farming equipment, most notably his green harvesting machines. He is survived by his wife of 66 years, Arline Pesce Bertelli; son, Jeffery Bertelli and daughter; Leah Jackson (Kirby), grandchildren; Amanda Wilkins (Billy) of Kingsburg, Gigi Mulry (Patrick) of Escalon, California, and grandson; Wyatt Jackson of Kingsburg. He was proceeded in death by his parents Antonio and Perina Bertelli and his brothers, Fred Bertelli and Leslie Bertelli. Viewing will be held 2:00 PM - 6:00 PM Wednesday, May 18th, 2022 at Salser & Dillard Creighton Chapel, with the Rosary will being held at 6:00 PM also at Salser & Dillard Creighton Chapel. A Mass of Christian Burial will be held at 10:30 AM Thursday, May 19th, 2022 at Holy Family Catholic Church, 1275 Smith Street, Kingsburg, immediately followed by burial at the Kingsburg Cemetery, 12782 E. Clarkson Avenue, Kingsburg. In Lieu of flowers the family request that donations be made to your favorite charity in Louie's memory or to the Kingsburg Cancer Volunteers, P.O. Box 26, Kingsburg, CA 93631 or the Kingsburg Historical Society, P.O. Box 282, Kingsburg, CA 93631 Services have been entrusted to Salser & Dillard Creighton Chapel. Memorial Tributes and condolences may be offered by logging onto www.salseranddillard.com.

Louis Albert Bertelli passed away May 7, 2022, in Kingsburg, California after a lengthy illness. Louie was born in Salinas, California on October 11, 1932, to Antonio Bertelli and Perina Querin Bertelli and raised on the family artichoke farm... View Obituary & Service Information

The family of Louis A. Bertelli created this Life Tributes page to make it easy to share your memories.

Send flowers to the Bertelli family.