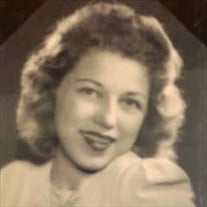 Lucile Mae (Kroeker) Turk May 3, 1924 - April 11, 2021 Fresno, California - On Sunday, April 11, 2021 Lucile Mae Turk, beloved wife, mother, grandmother, great-grandmother and friend, passed away at the age of 96. Lucile was born on May 3, 1924 to John and Louise Kroeker of Henderson, Nebraska. Lucile grew up on the family farm in the rural area of York county Nebraska. She grew up in a primarily German community and spoke only German for the first six years of her life, eventually learning English when she started elementary school. Lucile, her sister Edna and her parents left the family farm when she was 8 years old and moved to Reedley, California. There she graduated from Reedley High School and was working at Reedley Hospital as the secretary when she met her future husband Duane. They were introduced by friends, their first date being a blind date. Lucile then married the love of her life Duane Wallace Turk in 1948. He proposed just three months after their meeting and they were married six months later. They would have celebrated their 73rd anniversary in July of 2021. During their life together Lucile and Duane travelled with their family and friends on many hunting, fishing, and camping trips. She was an excellent companion to Duane and supported him in all of his many adventures. She was also a dedicated mother and a kind and gentle grandmother to her grandchildren and great grandchildren. She always knew what all of the children were up to and never failed to ask each one questions about their personal lives and recall many of the details and dates associated with each one. Lucile leaves behind her 3 children and their spouses; son Daryl Turk of Tampa, FL, daughter Diane Turk West of Clovis, CA, and daughter Kimberly Turk Collins of Fresno, CA, as well as 7 grandchildren, and 20 great-grandchildren. Lucile was preceded in death by her husband Duane W. Turk, sister Edna Ruth Parkinson and parents, John D. and Louise M. Kroeker.

The family of Lucile Mae Turk created this Life Tributes page to make it easy to share your memories.

Send flowers to the Turk family.