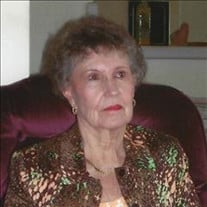 Mildred (lovingly known as Mimi) was born to Ruth and Frank Sasser on May 31, 1927 in Oklahoma and passed into the loving arms of her Savior, Jesus Christ on February 27, 2022, just three months before her 95th birthday. In the 1930's Mildred came with her family to California, settling in the Orange Cove area. She graduated from Reedley High School in 1945 and married Oddist Hull in 1947. They lived and raised three children in the Orange Cove home that Oddist built himself. Mildred was a very talented seamstress who made beautiful clothing for her daughters. When shown a picture of a current fashion, she could replicate it perfectly. Mildred was also an excellent cook, hard worker and entrepreneur. She partnered with her husband in the operation of a small country market when their children were small. Later she was a partner in owning and operating the first and largest supermarket, at that time, in Orange Cove. In the late 1950's Mildred became a licensed beautician, opening and operating a salon in Orange Cove for many years. In the 1980's she opened and operated another salon in Selma. Mildred was a beautiful and kind soul who was loved by many and easily made friends. She generously helped family members and friends in their times of need. Oddist and Mildred moved to Selma when their children were grown. Following Oddist's death in 2010, she continued living in her home until her failing health required assistance. She then moved to Sierra View Homes in Reedley where she was lovingly cared for until her passing. Preceding Mildred in death were her parents, sisters Madeline Durrett and Laveta Auernheimer, brothers Eldon and Eugene Sasser, her husband, daughter Jenny Shuman and granddaughter Shannon Banks. Mildred is survived by her son Gary Hull and wife Lois, daughter Sharon Baxter and husband Toby, grandchildren Melissa Ham, Melanie Anderson, Shelley Hull-Diaz, Matthew Jones and Jaime Baxter, 12 great-grandchildren, extended family and many friends. A Graveside Service will be held at 10:30 a.m. on Thursday, March 10 at Floral Memorial Park in Selma. Memorial donations may be sent to the donor's favorite charity, Services have been entrusted to Salser & Dillard Creighton Chapel. Memorial Tributes and condolences may be offered by logging onto www.salseranddillard.com.

Mildred (lovingly known as Mimi) was born to Ruth and Frank Sasser on May 31, 1927 in Oklahoma and passed into the loving arms of her Savior, Jesus Christ on February 27, 2022, just three months before her 95th birthday. In the 1930's Mildred... View Obituary & Service Information

The family of Mildred Marie Hull created this Life Tributes page to make it easy to share your memories.

Mildred (lovingly known as Mimi) was born to Ruth and Frank Sasser...

Send flowers to the Hull family.