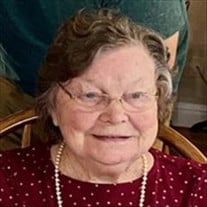 Nona I. Weidman of Kingsburg, 88 (but when asked, she was always 39) of Kingsburg, went home to be with her Lord and Savior on February 25, 2022. Though she journeyed with Alzheimer's for more than 9 years, she died of complications from a fractured hip. Nona was born in Taylor, North Dakota on October 24, 1933 to Velma Luella Farra and Zeno E. Farra. Nona grew up in Beach, North Dakota until the family moved to Portland, Oregon when she was 9. Her dad and uncles worked in the Portland ship yards. She grew up in Portland and was a champion in pairs roller skating at Oaks Skating Rink. She graduated from Cleveland High School in 1952. Nona met the love of her life, Lorin Weidman, through her cousin Carol who was dating Lorin's friend, Roy Batsch. They met in June of 1952 and were married on November 30th of that year. Nona had just turned 19 and Lorin was almost 21. Nona was a great wife and mom. They welcomed Lori in June of 1954, David in June of 1956 and Julie in July of 1957. They were busy with 3 children, aged 3 and under. As the children grew, Nona was active with Church, PTA, and was also a Brownie and Girl Scout leader. In 1967, the family moved to Campbell, CA where Lorin managed the newly built Grocery Store, Bazar Foods, in San Jose. Not being near a good bus system caused Nona to need to learn to drive and get her license for the first time when she was in her thirties. With all of the kids in school, Nona went back to school herself and then began working as a library Specialist at the San Jose State University Library where she worked for almost 20 years. They were active in the Campbell United Methodist Church and enjoyed many outings and events with friends through the years. They later attended Crossroads Bible Church in San Jose where they were involved with helping widows and the disabled. She and Lorin collected and helped distribute backpacks and clothing to school children through City Team Ministries in San Jose. Nona cared for and loved her family. When Nona's sister Georgia Schuermyer died of cancer at age 35 with 3 teenaged daughters, she became a mother figure to them and as time went by, a grandmother and great grandmother to their children and grandchildren. In June of 1999 they took a plunge and bought a home and fruit trees on 10 acres in Kingsburg to be near their grandchildren. She was active with the Tuesday Club and several women's groups and Bible studies. Nona was an active member of Kingsburg Community Church and also volunteered many years at KACPS. Nona and Lorin enjoyed traveling, especially with her brother Ed and his wife Mitsy. Nona was preceded in death by her parents Velma Farra and Zeno Farra, her brother Elwood Farra, her brother Willard (Bud) Farra, her sister in law mary Farra, her sister Georgia Schuermyer, her brother-in-law, Glenn Schuermyer, and two half sisters, Emma Nelson and Zetta Knopp. Nona is survived by her husband of 69 years, Lorin Weidman of Kingsburg, her daughter Lori Arnsberger and husband Brad, her son David Weidman and wife Carla, her daughter Julie Diaz and husband Michael, her grandchildren Amy Jackson and her husband Ryan, Ryan Arnsberger and his wife Erica, Amanda Lennon. Michael Mazotti, Stefanie Diaz, Joshua Diaz and his wife Brianna, Christina Lemus and her husband Christopher, great grandchildren Carter, Brylie, and Davis Jackson, Benjamin, Sarah, and Henry Arnsberger, Taylor Kish, Ace Escobar, Colton Diaz, Emily and Ivy Lemus, and two more due in 2022. Nona is also survived by her sister-in-law, Mitsy Farra of Ventura, brother-in-law Bob Weidman and wife Mirabel of Seaside, Oregon, Rosemary Weidman Samples of Albany Oregon, and her honorary daughter Connie Schuermyer Criss. She is also well loved by many nieces, nephews and grand nieces and grand nephew. She will be remembered for her sense of humor, gracious hospitality her love for others. A Celebration of Life service will be held for Nona on Saturday, March 5th, at 11:00 am at the Kingsburg Community Church, 1532 Ellis Street, Kingsburg, CA. Light lunch to follow.

Nona I. Weidman of Kingsburg, 88 (but when asked, she was always 39) of Kingsburg, went home to be with her Lord and Savior on February 25, 2022. Though she journeyed with Alzheimer's for more than 9 years, she died of complications from a... View Obituary & Service Information

The family of Nona I. Weidman created this Life Tributes page to make it easy to share your memories.

Nona I. Weidman of Kingsburg, 88 (but when asked, she was always...

Send flowers to the Weidman family.