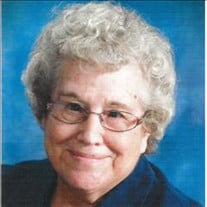 In Memory of Nora Mae Pendola June 21, 1929 - January 18, 2021 Nora Pendola was born to Clarence and Viola [Martin] Coghlan, on June 21, 1929, in Antlers, OK. She passed away on January 18, 2021 in Selma , California at the age of 91. She was preceded in death by Gordon, her husband of 50 years; her daughter, Judy; her parents; and four siblings; Pearl Bradley, Roy, Garlin and her twin brother Alfred Coghlan. Nora is survived by brothers Marlin & Harvey Coghlan; her two sons, Lloyd Pendola and wife Patricia of Kingsburg, Bob Pendola and wife Darlene of Visalia; eight grandchildren; eight great-grandchildren and dozens of nieces & nephews. Nora was from an early pioneer family. Her paternal second great grandparents John William Coghlan (1796) and Tersia Hyde (1801) were both born in South Carolina. Her maternal seventh great grandfather Jacob Flowers arrived on the ship "Increase" from England in 1656 and married Elizabeth Hardy who was born in Virginia in 1640. Nora grew up and attended schools around Paris, Texas. When she was 16 years old her family moved to California and settled near Kingsburg where she graduated from KHS in 1948. She was married that same year and in between being a housewife and raising three children managed to work 21 seasons as a fruit grader at Del Monte Cannery before retiring in 1986. Nora was a hard worker and an avid gardener and baker. If she wasn't working in her flower garden you would usually find her in the kitchen baking cookies or one of her delicious pies. Nora attended the Kingsburg Church of the Nazarene, 1401 7th Ave. Dr. A funeral service will be held at the church on January 29 at 11:00 am. A graveside service will immediately follow at the Kingsburg Cemetery at. The family would like to thank all the caregivers at Country Care assisted living for the excellent care that Nora received the past two years. Services have been entrusted to Salser & Dillard Creighton Chapel. Memorial Tributes and condolences may be offered by logging onto www.salseranddillard.com.

The family of Nora Mae Pendola created this Life Tributes page to make it easy to share your memories.

In Memory of
Nora Mae Pendola

Send flowers to the Pendola family.