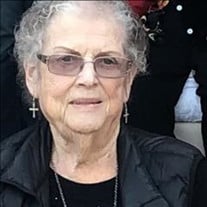 Norene Hellen March was born August 31,1935 in Visalia, California to Hugh A. and Vernice C. McKellar of Ivanhoe, CA. Born three years after her older brother Robert, she grew up in a close, loving citrus farming family. Norene attended Ivanhoe schools, graduated from Visalia Senior High School (now Mt. Whitney High), class of 1953, and attended the University of Redlands. While studying to be a teacher, she met a soldier boy named Lester A. March and married June 23, 1956. After moving to Fresno, CA, they attended Fresno State receiving their California Teaching Credentials. After moving to Kingsburg, CA, their first child was born, Janet, 1958, followed by Jeffrey, 1961, and Steven, 1964. While both Lester and Norene were pursuing teaching careers, they raised their kids being active in their church, community sports and organizations like Kingsburg Seawolves, and Kingsburg 4-H. Many of the relationships formed in those years lasted their lifetimes. Norene spent her early professional years as an elementary school teacher in Kingsburg before moving to Traver Elementary where she enjoyed three decades educating generations of children, all the while raising three of her own. As retirement approached in the early 1990's, Norene and Lester were active in the lives of their grandchildren and the pursuit of numerous "hobbies". Their many loves were serving the community, being active at church, finding that next treasure at a yardsale, playing Bunco, and traveling the western U.S. with their RV group, The Gypsies. Over the past 7 years, Norene continued to pursue her friendships and loved spending time "visiting". A visit to her house would include a tour of her card table, always the latest puzzle project, her hummingbird feeder just outside her window, the finch bird feeder, and the latest Bible study she was always excited to discuss. Norene will be remembered as a devoted wife and mother, incredibly generous, and possessing a ferocious sense of humor. Norene is preceded in death by her father and mother Hugh Vernice McKellar, and husband Lester March. She is survived by her daughter Janet Wann, son Jeff and his wife Eleni, son Steve, grandchildren Nick Smoljan III and his wife Lindie, Ashley Parkes, Karigan Wann, Kaitlyn Ibbs and her husband Ethan, Dimitrios March and his wife Samantha, Alexis Eberle and her husband Austin, Zoe March, and Sophia March; her great grandchildren Nickolas Smoljan IV, and Alice Ibbs. Please come celebrate Norene's life at a memorial service Thursday morning, February 17th at 11:00 am at The Reedley Mennonite Brethren Church. There is a reception to follow.

The family of Norene Helen March created this Life Tributes page to make it easy to share your memories.

Send flowers to the March family.