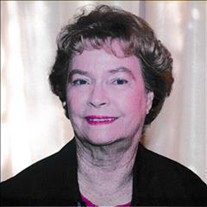 Oleta "Leta" Law, who resided in Kingsburg, California for 57 years, passed away on November 21, 2019. She was born in Keota, Oklahoma on January 29, 1928, to Les and Katey (Boyett) Wallen. She was their youngest and only girl. Her brothers were Clayton and Kennon. During the Dust Bowl, Leta's family migrated to California and settled in Chowchilla, where she attended Dairyland Grammar school and Chowchilla High School. After her high school graduation, she took classes at Modesto Junior College. Leta was a dependable and hardworking young woman who held jobs as a secretary, bookkeeper, and a bank teller (Bank of America) in Chowchilla before she married. In 1947, Leta met Calvin "Cal" Law, at a country school dance and they married on November 27, 1948. Five years later, they welcomed their first child, Michael, who was followed by Linda, Timothy, and Patrick. Leta enjoyed sewing, working in her garden, playing cards, traveling with her husband and friends on trailer trips, and being active in her church. When she became a grandmother, she was overjoyed. Spending time with her husband, children, and grandchildren during family celebrations and the holidays brought her much happiness. Leta and Cal were happily married for 57 years, until Cal passed away on June 7, 2006. They were a great team who loved their family and friends unconditionally. Their many friends enjoyed their sense of fun and appreciated their kindness and loyalty. Leta is survived by her four children; three grandchildren, Keenan and Alex Law (Michael and Shivon), Hailey Law (Tim and Marsha), and several nieces and nephews. A graveside service for the family will be held at the Kingsburg Cemetery on Wednesday, November 27th, at 2:00 p.m. When Leta is laid to rest next to Calvin, they will be reunited after 13 years, on their 71st anniversary. Tributes and condolences may be offered by logging onto www.salseranddillard.com

Oleta "Leta" Law, who resided in Kingsburg, California for 57 years, passed away on November 21, 2019. She was born in Keota, Oklahoma on January 29, 1928, to Les and Katey (Boyett) Wallen. She was their youngest and only girl. Her brothers... View Obituary & Service Information

The family of Oleta Law created this Life Tributes page to make it easy to share your memories.

Oleta &quot;Leta&quot; Law, who resided in Kingsburg, California for 57...

Send flowers to the Law family.