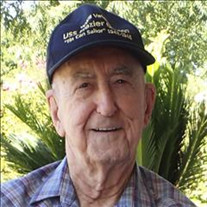 Oliver R. Jackson, 93, went home to be with the Lord on January 12, 202. He was the husband of Helen Hill Jackson, father of Larry Jackson of Enumclaw, Washington, Brenda Jackson of Kingsburg, California, Sharon Wallace of Healdsburg, California, and Dennis Jackson of Shell Beach, California, with 7 grandchildren, and 23 great grandchildren whom he dearly loved. On October 18, 1926, Oliver was born to Joe and Pearl Jackson in Sand Springs, Tennessee, and grew up on the Jackson family land where several generations had lived. Oliver had 11 brothers and sisters and is survived by Ada Schippers and Estellene Fox. He was predeceased by his brothers Hershel, Casto, Clarence, Woodrow, Edward and sisters Myrtle Matheny, Pruna Ihde, and Euna Taylor, and two infants. At the age of 17, Oliver joined and honorably served in the U.S. Navy during WW II fighting on the Samari Island until he contracted malaria and was subsequently stationed on the U.S. Frazier, a destroyer which participated in the Borneo and Balipakpapan Operations, helped secure the Philippine Islands, and escorted the occupation troops into Japan. Oliver and Helen Hill were married on January 2, 1946 and farmed in Kingsburg. Then they moved to St. Louis working in refrigeration. Moving to Southern California, he worked for Hughes Aircraft and repaired houses with his brother-in-law, Tharon Taylor. In 1964 the family returned to Kingsburg where Oliver farmed and sold tractors for Cornforth in Reedley; then at Del Monte Cannery as head mechanic on the pitting machines as well as, secretary-treasurer for the Teamsters union for 19 years. He was known for his integrity, intelligence, storytelling, and great sense of humor. Over the years, he gave away so many avocadoes that he was known as the "Avocado Man," and he always planted a garden into his 90's which he generously shared with family and friends. Visitation will be held on Sunday, January 26, 2020 from 2-4 P.M. and services on Monday, January 27, 2020 at 10 A.M., both services will be held at the Kingsburg Church of the Nazarene. He will be buried with military honors at Kingsburg Cemetery following the service. Remembrances may be made to Kingsburg Church of the Nazarene, 1401 7th Ave. Dr., Kingsburg, California, 93631. A Memorial Tribute may be offered by logging into www.salseranddillard.com.

Oliver R. Jackson, 93, went home to be with the Lord on January 12, 202. He was the husband of Helen Hill Jackson, father of Larry Jackson of Enumclaw, Washington, Brenda Jackson of Kingsburg, California, Sharon Wallace of Healdsburg, California,... View Obituary & Service Information

The family of Oliver R. Jackson created this Life Tributes page to make it easy to share your memories.

Send flowers to the Jackson family.