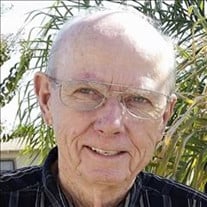 Paul Myron Steele, age 86, of Kingsburg, Ca went to be with the Lord on October 28th, 2021. Paul was born on December 31st, 1934 in Los Angeles to parents Paul & Myrtle Steele. He was the oldest of four children; his sister Audrey, brothers Gerald and Donald Steele. Paul was married to Carole steele and they raised four children; Todd, Ron, Sharon and Dave. Paul spent his early childhood in Los Angeles until moving to Lindsay, Ca where he graduated in 1953 from Lindsay HS, then attended and graduated from Cal Poly in 1957. He enjoyed camping and fly fishing as a young man and spent a lot of time in Sequoia National Park. He and his father took their experience in building a barn and two large chicken coops on the family farm to build a family cabin up at Hume Lake in 1971. The family spent many vacations fishing, swimming, boating, playing Kings Corner and just enjoying the mountains together. Paul farmed oranges in Lindsay while working for over 40 years as an Ag chemical sales manager for FMC and then ConAgra. In the summer of 1981, Paul and his family moved to Kingsburg, where his father & mother had previously lived some 60 years before settling in Lindsay. When Paul retired, his life did not slow down, in-fact he was busier than ever with 13 grandchildren & 5 great-grandchildren. He truly loved attending all their sporting events, school and church activities. Paul was a regular at McDonalds, Dala Horse & BDL with his coffee shop buddies; solving all the world's problems each day. He loved taking his grandkids to get haircuts, ice-cream, also yogurt with his great grandkids. Paul always had a big supply of skittles in his kitchen drawer when the grandkids came over, especially at Christmas and Thanksgiving. Paul's faith and love of Jesus was paramount on his life. He shared his knowledge, wisdom and experience to his children and grandchildren. He loved his family and was very proud of them. Paul's life touched so many people throughout the years and was a prominent figure in the community. He never met a person he wouldn't strike up a conversation with. He was called Paul, Brother, Son, Dad, Papa and Grandpa, but most importantly, Child of God. You will be sorely missed and always loved. You are now in the arms of the Lord Jesus Christ with a joyful heart. We know that someday you will greet us as we enter Heaven to welcome us home. Graveside services will be held 1:00 PM Friday, November 12th, 2021 at Kingsburg Cemetery, 12782 E. Clarkson Avenue, Kingsburg. Services have been entrusted to Salser & Dillard Creighton Chapel. Memorial Tributes and condolences may be offered by logging onto www.salseranddillard.com.

Paul Myron Steele, age 86, of Kingsburg, Ca went to be with the Lord on October 28th, 2021. Paul was born on December 31st, 1934 in Los Angeles to parents Paul & Myrtle Steele. He was the oldest of four children; his sister Audrey, brothers... View Obituary & Service Information

The family of Paul M Steele created this Life Tributes page to make it easy to share your memories.

Send flowers to the Steele family.