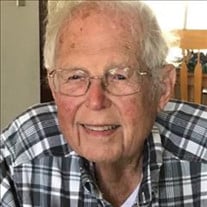 Peter Kenneth Kliewer was born April 13, 1930 in Bakersfield, CA and died at the age of 90 on February 7, 2021 at his daughter's home in Kingsburg, CA. Pete grew up in Bakersfield with four siblings. He attended Pacific Bible Institute, now Fresno Pacific University. He married Dora Mae Hubert in 1951. They raised their children, then indulged their love of travel, taking trips to Spain, Alaska, Australia, Canada and others before Dora Mae's illness curtailed their vacations. Pete faithfully cared for Dora Mae through a long, increasingly debilitating battle with Parkinson's Disease. They celebrated their 67th wedding anniversary shortly before her death in 2018. Pete retired from CalCA, his brother's controlled atmosphere company, in 1995, where he had worked as welder and project manager. Pete and his family were active members of Kingsburg MB Church, now Hope Kingsburg Church, where he will be remembered for his friendliness and willing spirit. He especially enjoyed serving in the music ministry and blessed many with his voice. He sang with his twin brother, in quartets, with Dora Mae and in the church choir. He also sang with the Mennonite Men's Chorus. He passed his love of God and his love of music on to his family. Pete is survived by his three children and their spouses, Marilyn (Kliewer) Deegan and husband Randy, Loren Kliewer and wife Candis and Karleen (Kliewer) Wiens and husband Steve; eight grandchildren, nine great-grandchildren, two sisters, Peninnah Weaver and Eileen Karber, two sisters-in-law, Rachel Gerbrandt and Loralee Kliewer and many nieces, nephews and friends. A Memorial Service for Pete Kliewer will be held at Hope Kingsburg Church at 3 pm on Tuesday, February 16, 2021. Services have been entrusted to Salser & Dillard Creighton Chapel. Memorial Tributes and condolences may be offered by logging onto www.salseranddillard.com.

Peter Kenneth Kliewer was born April 13, 1930 in Bakersfield, CA and died at the age of 90 on February 7, 2021 at his daughter's home in Kingsburg, CA. Pete grew up in Bakersfield with four siblings. He attended Pacific Bible Institute, now... View Obituary & Service Information

The family of Peter Kenneth Kliewer created this Life Tributes page to make it easy to share your memories.

Send flowers to the Kliewer family.